Franz Liszt’s Totentanz (Dance of Death) is unsurpassed for virtuoso excitement, and the young Russian pianist Gleb Ivanov will take on this challenging role. Another Hungarian composer, Bela Bartok, frequently performed the Totentanz, and our concert opens with his exciting Dance Suite. The Hungarian language is unrelated to those surrounding Hungary, but it does share a strong connection with Finnish. Our concert closes with the most popular symphony of Finland’s most important composer — the rousingly patriotic Second Symphony by Jean Sibelius. 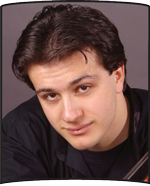 At his first New York recital in 2005 at Zankel Hall, pianist Gleb Ivanov was recognized as an important new presence in the music world. The New York Times wrote: Gleb Ivanov “is a cut about the usual, a young super-virtuoso, with musical sensitivity and an appreciation of style to go with the thunder and lightning.”

A sought-after concerto soloist, Mr. Ivanov performs a wide range of concerto repertoire, from Mozart to Rachmaninoff and has appeared with orchestras including the Symphony Orchestras of West Michigan, South Bend, Peoria, Grand Rapids, and the Indianapolis Chamber Orchestra.

Adored in Paris, he has been re-engaged four times by the Louvre Museum for specially requested all-Schubert and all-Chopin concerts. Mr. Ivanov has also been frequently re-engaged by Princeton University, the Isabella Stewart Gardner Museum in Boston, “Pianofest” in East Hampton, Bargemusic in New York City, and at Fisher Island Concerts. He also performs with the Taos Chamber Music Group.

In recognition of impressive career achievement, Ivanov was awarded the Michaels Award of Young Concert Artists, which brought his Lincoln Center recital debut at Alice Tully Hall and a rave review in The New York Times. His program of Russian repertoire included works by Prokofiev and the Rachmaninoff Cello Sonata with New York Philharmonic principal cellist Carter Brey.

At a young age in Russia, Ivanov was a protégé of Mstislav Rostropovich, appearing as soloist under the famous maestro with the Nizhny Novgorod Philharmonic. He also performed with the Moscow State Orchestra, with the Kremlin Orchestra, and at the Pushkin, Glinka, and Scriabin Museums in Moscow. Mr. Ivanov won First Prizes at the 1994 and 1996 International “Classical Legacy” Competition, and the prize for Best Performance of a Beethoven Sonata at the First Vladimir Horowitz Competition in Kiev.

Months after arriving in the United States, Mr. Ivanov won First Prize in the 2005 Young Concert Artists International Auditions. He made his New York debut in 2006 at Carnegie’s Zankel Hall and his Washington, DC debut at the Kennedy Center, to rave critical acclaim.

Mr. Ivanov comes from a family of musicians, and began to accompany his father’s vocal recitals at the age of eight. He has also played the clarinet and the accordion, and holds a diploma in clarinet from Lyardov High School. He graduated from the Moscow Conservatory in 2005, where his teachers included the renowned Lev Naumov. Moving to the United States after winning the Young Concert Artists Auditions, Mr. Ivanov earned his Master’s degree from the Manhattan School of Music, working with Nina Svetlanova.

Louis Lortie and the North Carolina Symphony in Liszt’s Totentanz (Dance of Death). The main theme is the medieval Dies Irae chant.

Sibelius
Symphony No. 2 in D Major

Leonard Bernstein and the Vienna Philharmonic in the final two movements of Sibelius’ Second Symphony.

Béla Bartók ranks with Franz Liszt as Hungary’s greatest composer; in fact, the New GroveDictionary of Music and Musicians refers to Bartók as the “greatest composer of his country.” Despite a reputation with some as a composer whose music is difficult, almost all of his orchestral works are in the standard repertoire. Bartók and his fellow composer Zoltán Kodály spent many years in the early 20th century collecting and documenting Hungarian folksongs, in a manner similar to the efforts of Vaughan Williams and Holst in Britain. Bartók’s usage of folk inspired themes guarantees the accessibility of this music; as he once wrote, “atonal folk music is unthinkable.”

The Dance Suite was composed in 1923 on a commission to celebrate the 50th anniversary of the combination of the towns of Buda and Pest. Possibly due to its celebratory nature, the Dance Suite is imbued with Hungarian, Romanian and Arabic folk elements and has been one of Bartók’s most popular works since its premiere. Its six sections, requiring about 16 minutes to perform, are brilliantly scored. The fourth section, marked Molto tranquillo, is an example of the “night music” for which Bartók is famous.

Totentanz in German means “dance of death,” and its French translation is Danse macabre. The score shows a secondary title: Paraphrase on “Dies Irae,” referring to the Latin medieval chant depicting the day of judgment. Regardless of the language, this quasi- piano concerto offers a spectacular virtuoso display beyond either of Liszt’s numbered concertos.

Liszt first conceived the Totentanz in 1839, but did not finish it until 1849. He revised it over the next decade, completing a second version in 1859, which was published and premiered in 1865, and this is the score usually recorded and performed in concert. The revised version opens with solo piano and timpani pounding out the Dies Irae theme, a passage which is echoed close to the start of Bartók’s Sonata for Two Pianos and Percussion. This not an accident, as Bartók was a superb pianist who achieved great success with his many performances of Totentanz.

After this dramatic opening, five variations on the Dies Irae theme follow. The first three are quite short; the fourth is marked Canonique, referring to the church, and the fifth is a long fugue. After a solo cadenza, the Dies Irae returns in a smashing finale. The Dies Irae itself dates from the 14th century, and has been used by many composers, notably Berlioz in his SymphonieFantastique and Rachmaninoff in his Rhapsody on a Theme of Paganini and Isle of the Dead.

Jean Sibelius’ first major success came in 1899 with his Finlandia, a short but dramatic tone poem whose hymn-like central theme is frequently thought of as the national anthem of Finland. Also in 1899 came the premiere of his First Symphony, written largely in the style of Slavic romanticism and with a tragic minor key conclusion. In 1901 Sibelius visited Italy for the first time and began the Second Symphony, which was completed and premiered in 1902. Many Finnish commentators viewed the Second, particularly its stirring finale, as a large symphonic analogue of Finlandia, and it has remained Sibelius’ most popular symphony since the premiere.

Allegretto. The restrained first movement functions as a D Major prelude to other three movements, which contain the true narrative drama of the symphony. This movement is pastoral in nature, and starts with fragments of themes which are gradually aggregated as they develop.

Tempo Andante, ma rubato. This intensely tragic D Minor movement begins with dark plucked notes on the low strings followed by the main theme on the bassoons, marked lugubre. Sketches for the symphony identify this theme with death/Don Juan. The mood grows more despairing until the high strings introduce the serene, major key second theme, titled “Christus” in the sketches. Both themes are repeated, but death ends the movement.

Vivacissimo. The third movement scherzo is in a major key, and as the tempo marking indicates, quite fast. The contrasting “trio” section features a melancholy oboe theme in which the first note is played nine consecutive times. The quick scherzo theme repeats, as is usual in a symphony, but then the repeated note trio returns to serve as a transition into the finale without a break (signified by the word attacca).

Finale. Allegro moderato. The surging main string theme of the finale, with accompanying brass fanfares, brings back the key of D Major. The more somber second theme, played by the winds with a swirling string accompaniment, is a memorial to Sibelius’ sister-in-law, who had committed suicide close to the time of the work’s composition. The patriotic main theme is then recapitulated in close to its original form, but the return of the second theme is much more complex. This theme, now in the key of D Minor, like that of the second movement, is repeated eight times, in a gradual crescendo with an ever increasing swirling accompaniment. At the climax of this crescendo, the key returns to D Major for the final apotheosis of the patriotic main theme which concludes this grand Romantic symphony.