Performances by the Evanston Symphony Orchestra.

Forrest’s arrangement of See Amid the Winter’s Snow

We’ll miss performing in and seeing our audience at the Holiday Concert in 2020. See you next year in person!

“I’m from the South Side of Chicago — just like Bad, Bad Leroy Brown!” said the Reverend Kenneth Cherry with his huge, infectious laugh. Unlike the protagonist of Jim Croce’s 1973 hit, however, Ken Cherry was certainly not “the baddest man in the whole damned town!” His parents, his church, his school and his love of gospel music were the mainstays of his life growing up and Beautiful Zion Missionary Baptist Church at 64th and Loomis was the church home of the Cherry family: mother, father and six children.

Ken’s aunt was the choir director at Beautiful Zion and from the age of five he travelled everywhere with the choir, describing himself as the choir’s “mascot.” Beautiful Zion was certainly a center of gospel music in Chicago. Ken’s aunt and one of her friends were responsible for recording the gospel hymn "I'll Make it Alright" with the Beautiful Zion Choir, also in 1973; it became the first gospel hymn ever to make it on to the R&B charts as a bestseller. Despite his musical background, Pastor Cherry describes himself as the "Michael Jackson" of his family. Why? Because, like the legendary late pop singer, he is the only one in his family who does not play an instrument! His brothers play drums and keyboard and her sister plays clarinet, but Pastor Cherry’s instrument is his voice, whether singing or preaching.

Ken first heard the call to the ministry in the Missionary Baptist Church when he was 11 and at age 12 gave his first sermon before his congregation, which promptly granted him a license to preach. This call was a surprise to no one, however. "My fifth great-grandfather established a church right out of slavery, and there have been preachers in my family for five generations," he said. It was also a given that music would be part of his ministry. He sang with the classical choir in high school and later with a barbershop quartet and, while still a teen, attended classes at the Chicago Baptist Institute. He is currently pastor at Christ Temple Missionary Baptist Church on Emerson St. in Evanston.

When asked why people are drawn to this congregation of 300 and what makes it makes it special, Pastor Cherry's immediate response was, "Love. It's a very powerful, loving congregation. A strong congregation is where people love one another." 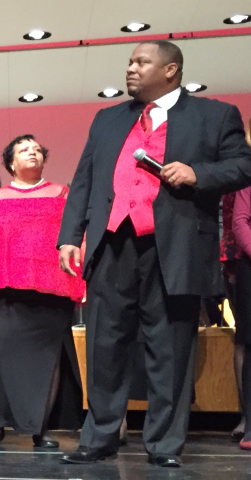 It also comes as no surprise that Christ Temple has a strong gospel choir. When asked what drew him to gospel music, Pastor Cherry replied "The passion — and you can make any gospel song your own. You listen to a song and you start saying to yourself ‘If I were singing this, I’d add something here and do that a bit differently.’ Five people can start out with the same song and you'll end up with five completely different interpretations, but underneath it's still the same gospel song." The Christ Temple Choir joins with members of the choirs of Evanston’s Faith Temple Missionary Baptist Church and First Church of God to form a gospel choir that has been performing with the ESO at its annual holiday concert since 2015. The choir’s rendition of the glorious Hallelujah Chorus from Quincy Jones’ "Handel's Messiah: A Soulful Celebration" is an audience favorite!

Just south of Christ Temple Missionary Baptist Church is the Fleetwood-Jourdain Community Center, where Ken Cherry is the director. Fleetwood-Jourdain offers an array of services to the community, from after-school programs for kids to Wednesday lunch for seniors, from a superb community theatre to roller-skating. It is this last that is a special love of Ken Cherry. When asked if he had any hobbies he immediately said "Roller-skating!"

"Four wheels or blades?" we asked.

"Definitely four wheels!" he exclaimed. "Blades are for long distance. Four wheels are for flair and style!"

And that pretty much sums up the Reverend Kenneth Cherry: a man who loves his church, his music and his community — and serves them all with flair and style!