First performed in March of 1870, Tchaikovsky’s Romeo and Juliet is a beautiful piece full of tenderness and turmoil, reflecting the themes in Shakespeare’s story of love desired and denied.  Yet, there is a thread in the story that is also emblematic of Tchaikovsky’s own life and work. It is the thread of bridging two worlds, and of difficult love and relationships.

While the union of Romeo and Juliet represented a clash and integration of the factions of the Capulets and Montagues, Tchaikovsky’s style as a composer straddled styles of the East and West, not universally accepted in either place. Russian composers of the time (including “The Five,” Mily Balakirev, Cesar Cui, Modest Mussorgsky, Nikolai Rimsky-Korsakov, and Alexander Borodin), worked together to create a distinctive nationalist style of classical music. These composers thought that Tchaikovsky’s style did not sufficiently represent native musical values. They suspected that Europeans accepted his music primarily because it had western elements. Indeed, many Europeans praised him for offering music more substantive than what they viewed as the “exoticism” of traditional Russian composers. Yet other Europeans dismissed his music as “lacking in elevated thought” and deficient for not adhering to western principles more stringently.

This blending of musical styles may well reflect Tchaikovsky’s biological lineage. Today’s audiences generally think of Tchaikovsky as purely Russian. However, his mother was French and German on her father’s side, he was raised by a French governess, and by the age of six he was fluent in French and German. His paternal grandfather was born in Mikolaiv (present-day Ukraine), and his great grandfather was a Ukrainian Zaporozhian Cossack named Fyodor Chaika, who distinguished himself under Peter the Great.

The process of writing the Romeo and Juliet was itself full of turmoil. It was radically revised twice, with a premiere being held for each of the three versions (Moscow in 1870; St. Petersburg in 1872; and Tbilisi, Georgia in 1886). The first premiere was a flop, with the music being overshadowed by a personal scandal involving the conductor, Nikolai Rubenstein. Initially encouraged to write the piece by Mily Balakirev, the early drafts were constantly in the mail between the two, with Balakirev harshly discarding many of his early ideas. After the second premiere, Balakirev wrote to him, "Although the new introduction is a decided improvement, there were other changes I had wanted you to make. I had hoped that for the sake of your future compositions, this one would remain in your hands somewhat longer."  Thus, yet a third version was completed in 1880; this is the "standard" version which is commonly performed and will be performed at this concert. Balakirev did, however, adore the love theme saying, “I play it often, and I want very much to hug you for it.”  Indeed, the love theme has experienced lasting power.  It has been used in many television series and movies, such as Columbo, The Jazz Singer, Wayne’s World, and Fresh Prince of Bel-Air. The theme is familiar to almost every modern listener.

In Shakespeare’s story, after the tragic deaths of Romeo and Juliet, the Capulets and Montagues agreed to reconcile. Eventually Tchaikovsky, too, was able to reconcile Russian and European influences in his compositions and attempted to show that these aspects were “intertwined and mutually dependent.” He was voted a member of the Academie des Beaux-Arts in France, only the second Russian and the first Russian musician to be so honored. He was also awarded an honorary Doctor of Music from the University of Cambridge shortly before he died. 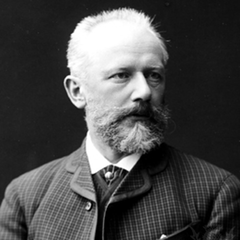