During Ludwig van Beethoven’s time (1770-1827), adding a chorus and vocal soloists to a symphony was never done and was considered highly unusual. Of course, that did not stop the composer from including a choral component in the fourth movement of his ninth symphony, making him the first major composer to accomplish this. Despite Beethoven’s hearing loss, he was still able to compose music, but conducting and performing at concerts (he was a talented pianist) was becoming problematic.

The words sung in Symphony No. 9 come from the poem “Ode to Joy” by Friedrich Schiller, in addition to text Beethoven added himself. Between the time Schiller’s poem was published in 1785 and when Beethoven’s ninth symphony premiered in 1824, Beethoven made several attempts to set Schiller’s words to music. In fact, the composer kept several notebooks rejecting some 200 different versions of his “Ode to Joy” theme; however, most of Symphony No. 9 was composed between 1822 and 1824, and was the last symphony Beethoven wrote.

By the time the piece premiered in May 1824, Beethoven was almost completely deaf. It is unclear whether Beethoven conducted the orchestra himself, or if he was nearby facing the orchestra and chorus to provide tempo cues for the conductor. Either way, the audience showed their appreciation by applauding loudly and enthusiastically at the conclusion of the piece, but the composer didn’t realize this until someone turned him around.

The success of this first choral symphony established a new musical genre for later composers including Hector Berlioz, Franz Liszt, Felix Mendelssohn, Igor Stravinsky, and others. Even today, Beethoven’s Symphony No. 9 is enjoyed by audiences everywhere and is considered to be the composer’s greatest work. 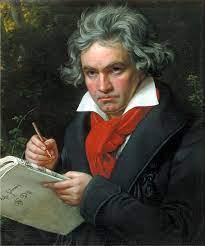