Ed graduated from high school in June of 1942 and began his studies at Northwestern the following September. The war was heating up, however, and in January of 1943 Ed, like so many of his classmates, signed up. He enlisted in the Army Air Force and ultimately was stationed on Guam until the end of war. After his discharge, he returned to Northwestern where, in 1949, he finished a B.A. in finance, the field in which he spent his entire career.

Music was always an important part of Ed’s life. From 1951 to 1956, he sang in the bass section of the renowned Choir of Men and Boys at St. Luke's Episcopal Church in Evanston, where he met his future wife, Barbara Ellis, an organ student at NU. They married on July 7, 1956, and in the late 1950s became active members at St David’s Episcopal Church in Glenview. Barbara was the choir director and Ed lent his versatile voice to the tenor section, positions they held until 1968.

In 1962, Ed earned an MBA at Northwestern, and fellow St. David’s choir member Lilias Circle had a suggestion to fill the time once taken up by his studies: why not join the Evanston Symphony? Lilias herself was a longtime member of the viola section and an enthusiastic fan of legendary music director (and CSO principal cellist) Frank Miller. Miller invited Ed to join the cello section, where he was a mainstay until his retirement in 2013. This 50-year stretch was broken only by three years in Pittsburgh for work; during this interlude Ed played in the Carnegie-Mellon Orchestra, a joint student-community endeavor.

Linda Loiben-Kaplan, longtime ESO cellist, first met Ed when she joined the orchestra in 1976. “He and I were stand partners many times over the years,” she said. “Ed loved playing in the orchestra and his biggest fans were his family. He was the sweetest man. What I remember about Ed is that he always copied the music in a huge font so we would have no trouble reading the small notes. A wonderful man who will always be missed.” ESO Co-Principal Cellist Rhea Davis adds that Ed was “thrilled to have Frank Miller’s cello part bowings.”

Ed and Barbara raised five children: Alison Jacobson, a nurse in Indianapolis; Andrea Bennett, who lives in Los Angeles-and is the proud owner of Ed's fine Reuter cello; Laura Bennett, the ESO’s official photographer; Linda Bennett an expert on the historic architecture of Charleston, SC, where she now lives; and Jim Bennett, who lives in Chicago and works for a health care consulting firm. There are also four grandchildren in the Bennett clan: Sarah Fleming (Josh), a lawyer in Washington state; Katie Jacobson, an event planner in Houston, TX; Annie Bennett, a voice performance major at Roosevelt University in Chicago; and Jack Bennett, a second-grader who is a dinosaur and Lego expert. All of the Bennett children and grandchildren will be at the ESO’s October concert.

Ed and Barbara loved to travel. On this continent, they have been to almost all of the 50 states, to several Canadian provinces, and on one vacation to Mexico. They took many trips to the UK and Europe and also visited Russia; Australia and New Zealand. They traveled around South America by ship, made a transatlantic crossing on the QM2 followed by a Mediterranean cruise on the same ship. While their most unusual trip was to the Galapagos under the auspices of the National Geographic with several of their children, their favorite small ship was the clipper Stad Amsterdam, a three-masted schooner that sailed in the Caribbean.

In addition to appreciating his talents in music and finance, Barbara Bennett also gives kudos to her husband of almost 62 years for being “the resident gardener, plumber, electrician, painter and handyman” of their family. A celebration of Ed’s life was held on what would have been his 94th birthday, April 2, 2018, — complete with birthday cake. 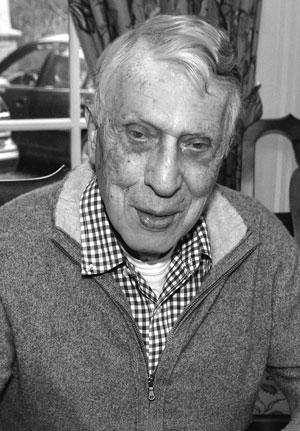