Bringing the Community Together Around Music

Bringing the Community Together Around Music

The Evanston Symphony Orchestra is honored to have Lawrence (Larry) Eckerling as our Music Director. Whether Larry is conducting the orchestra, developing a season’s worth of concert programs, or selecting soloists, he combines his passion for music with his desire to reach people: the audience, the musicians, and the community overall.

“When I conduct,” he says, “my hope is that I will transmit to the audience, and to the players, my sense of just how moving the music is. My job is to portray emotion, to touch the soul.”

For as long as he can remember, Larry has been drawn to music. He began playing piano and studied at Northwestern when he was just six years old. In high school, he played clarinet, loved choir music, became involved in musical comedy, and began writing pop songs. His knowledge and love of various instruments and musical genres allowed him to begin creating full pop arrangements and finally, to begin conducting classical orchestra music.

What attracted Larry to conducting was just how hard it was. He has a knack for looking at the notes on a page and just being able to hear it—and with orchestral work, and all the transpositions, he enjoyed that it challenged him to work harder.

While much of what he learned about truly making music came from his piano teacher, Larry has also had the opportunity to study with excellent conductors. He trained in the direct lineage of the great French composer, teacher, and conductor, Nadia Boulanger. It was through that lineage that he received rigorous ear training, score reading, and extremely sophisticated rhythmic development.

But the single most important music lesson of his life came when he was a student of Leonard Bernstein at Tanglewood. Bernstein offered a different perspective on what it meant for a conductor to “stick to the score.” He said that it was not just about looking for the “word” instructions in the score, but to look at ALL of the score—the notes, harmonies, the meaning behind the notes.

That lesson changed Larry forever—it liberated him to take orchestra conducting and music-making to a different level.

It’s these wide-ranging interests and experiences that make Larry the perfect choice for leading the ESO. Larry brings to bear all his experiences to develop and deliver creative programs. He arranges music for our holiday performances, selects concert soloists, and regularly collaborates with the directors of the Dance Center Evanston, North Shore Choral Society, The Evanston Children’s Choir, and Evanston Gospel Choir.

When asked what he loves about working with the orchestra, Larry replies, “Everything.” Any skeptical listener will be quickly convinced by how Larry describes the experience. He says there are proud moments in every concert he conducts, and he cannot wait until the next one.

During rehearsals, he is listening and then working to make the sound even better, but during concerts, it’s totally different. Before a concert, he is aware that he is about to deliver a gift, that the gift is now, and that everything counts right now. As he conducts, he is totally in the experience of the music. At the end of the concert, Larry says he feels “an enormous amount of pride when he can see in the faces of the musicians that they know they have done well.”

Not surprisingly, this year has been a little rough. Without concerts to conduct, Larry committed himself to plan for the future and is very engaged with the Symphony Board. He has been getting acquainted with new composers and music and has been looking at programming that will engage and inspire the audience and our musicians, as we emerge from the pandemic. He continues to play piano in all different styles and made some video recordings. He also enjoys movies, good food, and keeping up with politics.

Larry seems so consumed with and passionate about music, one wonders whether he could have ever considered spending his life, and making a living, any other way. Larry confirms that he never considered it.

“It’s more like, I have to be a musician,” he says. “I AM a musician. And fortunately, I can also make a living at it. There was no choice.”

The Evanston Symphony Orchestra and our community are certainly glad for that. 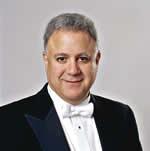