Our blockbuster 71st season opens with three favorite Viennese composers, and with the Evanston Symphony debut of fast-rising star Alexandra Switala in Mozart’s final violin concerto. Schubert began his final symphony a year after ­attending the premiere of Beethoven’s 9th, and this “Great” C Major symphony lives up to its Beethovenian ­inspiration, although without using a chorus and vocal soloists. 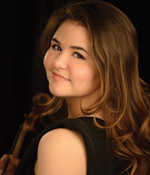 Violinist Alexandra Alvarado Switala began her musical studies in Texas, where she studied with Jan Mark Sloman. She formerly studied with Roland and Almita Vamos in Chicago and is currently pursuing her undergraduate degree with Ida Kavafian at the Curtis Institute of Music in Philadelphia. In the past, Ms. Switala has received the tutelage of renowned performers and legendary teachers such as Pinchas Zukerman, Itzhak Perlman, Masao Kawasaki, and David Cerone. Ms. Switala is also an avid chamber musician, having studied with members of the Cavani, Orion, Mendelssohn, and Guarneri string quartets.

Ms. Switala made her professional debut with the Fort Worth Symphony at age 13, and has since performed with orchestras such as the New World Symphony, the Buffalo Philharmonic, the Cleveland Orchestra, and the New York Philharmonic. Other engagements have included orchestras in the Dallas/Fort Worth area and the greater Chicago area. She has been a featured artist on the nationally syndicated media such as the PBS television show From the Top at Carnegie Hall, the NPR radio show Performance Today, and on Chicago WFMT’s Introductions.

Her success at competitions includes top prizes at the Cooper International, Sphinx, and Klein International competitions. At the Klein she received special prizes for her performance of both Bach and a commissioned work by Richard Festinger. She is a recipient of the Bayard H. Friedman award for Outstanding Student in the Performing Arts in Fort Worth and the Texas Commission on the Arts Young Master Award. A born-and-raised Texan, she has recently moved to the Chicago area.

Symphony No 9 "The Great" with Wolfgang Sawallisch and the Vienna Philharmonic.