Our 75th anniversary season reopens with a program of masterpieces from the Austro-German tradition. Johannes Brahms and Richard Wagner were the two leading composers in the Germanic music world of the mid-to late-19th century: the program begins with one of Wagner’s greatest overtures and concludes with the monumental final symphony of Brahms. Another masterpiece occupies the central part of the concert: the ever-popular Mendelssohn violin concerto with the dazzling virtuoso Arnaud Sussmann. 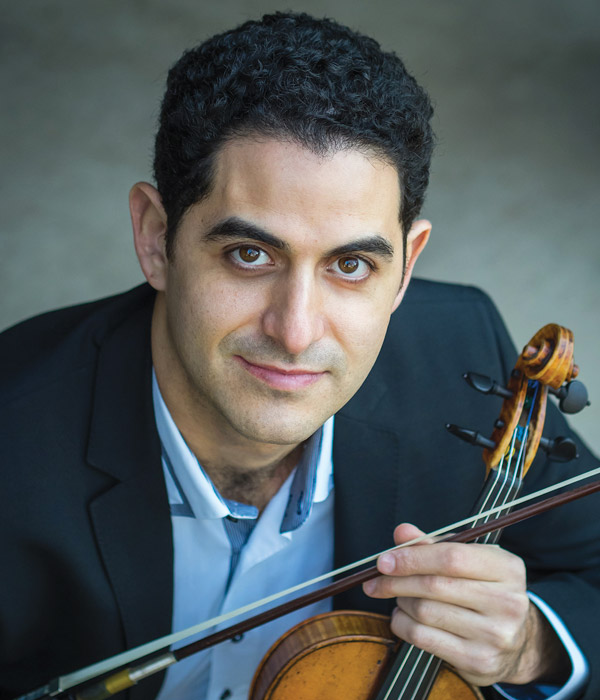 Winner of a 2009 Avery Fisher Career Grant, Arnaud Sussmann has distinguished himself with his unique sound, bravura, and profound musicianship. Minnesota’s Pioneer Press writes, “Sussmann has an old-school sound reminiscent of what you'll hear on vintage recordings by Jascha Heifetz or Fritz Kreisler, a rare combination of sweet and smooth that can hypnotize a listener.” A thrilling musician capturing the attention of classical critics and audiences around the world, he has recently appeared as a soloist with the Mariinsky Orchestra under Valery Gergiev, the Vancouver Symphony, and the New World Symphony. As a chamber musician, he has performed at the Tel Aviv Museum in Israel, London’s Wigmore Hall, Lincoln Center’s Alice Tully Hall, the White Nights Festival in Saint Petersburg, the Dresden Music Festival in Germany, and the Phillips Collection in Washington, DC. He has been presented in recital in Omaha on the Tuesday Musical Club series, New Orleans by the Friends of Music and at the Louvre Museum in Paris. He has also given concerts at the OK Mozart, Moritzburg, Caramoor, Music@Menlo, La Jolla SummerFest, Mainly Mozart, Seattle Chamber Music, Chamber Music Northwest, and the Moab Music festivals. Mr. Sussmann has performed with many of today’s leading artists including Itzhak Perlman, Menahem Pressler, Gary Hoffman, Shmuel Ashkenasi, Wu Han, David Finckel and Jan Vogler.

Meet our soloist, Arnaud Sussmann, at Musical Insights. He and our Maestro Lawrence Eckerling and David Ellis will explore the November concert program in depth.

WAGNER’S COMEDIC MASTERWORK. Alex Ross’ recent book Wagnerism summarizes the profound cultural impact of Richard Wagner: “Wagner’s effect on music was enormous, but it did not exceed that of Monteverdi, Bach, or Beethoven. His effect on neighboring arts was, however, unprecedented. And it has not been equaled since, even in the popular arena.” Wagner composed 13 operas, of which the ten starting with The Flying Dutchman hold the stage today as part of the canonical repertoire. Wagner also developed the plots and wrote the librettos (words) for all of his operas; Die Meistersinger is a rarity in that the leading female character (Eva) is still alive at the end of the opera, as it is the only comedy of the canonical ten. The guild of the Meistersingers is led by the cobbler Hans Sachs, who assists Walther von Stolzing in composing the prize song necessary to win the hand of Eva. The Prelude is built upon themes representing the Meistersinger guild, the march-like entry of the Meistersingers, and Walther’s prize song. When performed in the opera house, the music of the Prelude leads directly into the opening scene without a pause, hence the title Prelude instead of Overture. This performance will use a standard concert ending drawn from the final measures of the opera.

MENDELSSOHN’S MELODIC MASTERWORK. This work is perhaps the most popular of all violin concerti, and its appeal was aptly summarized by the eminent Joseph Joachim in 1906: “The Germans have four violin concertos. The greatest, the most uncompromising, is Beethoven’s. The one by Brahms vies with it in seriousness. The richest, the most seductive, was written by Max Bruch. But the most inward, the heart’s jewel, is Mendelssohn’s.”

I. Allegro molto appassionato. The soloist immediately states the memorable principal theme over a quiet accompaniment. However, the second theme is taken by the woodwinds while the violin soloist plays a sustained lower register note. An unusual feature of the structure of this movement is the placement of the soloist’s cadenza before the recapitulation of the main themes rather than after it. As the movement ends, Mendelssohn inserts a transition in order to continue without a pause: there is also no pause between the second and third movements.

II. Andante. The lyricism of the slow movement could be titled a “song without words” for violin, similar to the many which Mendelssohn composed for solo piano.

III. Allegro molto vivace. The key shifts to a bright E Major for this vivacious, but always lyrical finale.

BRAHMS’S TRAGIC MASTERWORK. “This symphony is one of the rarest things in classical music, a symphony which ends tragically.” Donald Francis Tovey (1935). “The purely tragic concept was first hinted at in Brahms’s Fourth which ends sternly in the minor; but the fierce vitality of its conclusion precludes any idea of a tragic catastrophe.” Deryck Cooke (1980). These two quotations reveal a stark disagreement between two of the most highly respected writers in the English language on the fundamental nature of the Fourth Symphony of Johannes Brahms. The source of the contrasting views is that this symphony, although beginning in a minor key, also ends in the minor, rather than moving to a major key in the “plot” pioneered by Beethoven in his Fifth Symphony. There is no disagreement, however, that the Brahms Fourth is an absolute masterpiece, one of the cornerstones of the symphonic repertoire. Brahms conducted the 1885 premiere with the Meiningen Orchestra, one of Germany’s greatest at the time due to its music director, Hans von Bülow (who had also led the premiere of Die Meistersinger in 1868).

I. Allegro non troppo. The symphony introduces the principal theme immediately, a simple two notes on the violins, which are varied repeatedly in rising and falling phrases. The second theme is a lyrical melody in the cellos and horns. Unlike his previous symphonies, Brahms does not provide a repeat of the exposition, instead disguising the transition into the exposition. Also unlike his earlier symphonies, there is an impassioned coda ending with powerful timpani strokes.

II. Andante moderato. The key shifts to E Major as the horns and then winds introduce a bardic theme, immediately joined by pizzicato strings in the continuation of the theme. An impassioned central section gives way to the themes of the opening.

III. Allegro giocoso. This, the only true scherzo in the Brahms symphonies, is among the greatest in the repertoire. The rambunctious atmosphere is aided immensely by the addition of the piccolo and the triangle, Brahms’ only usage of percussion (not counting the timpani) in any of his symphonies or concerti. The contra-bassoon also joins the orchestra. The principal theme is immediately memorable, and the structure is the standard scherzo format of ABA, with a slower and quieter central section.

IV. Allegro energico e passionato. The finale is cast in the form of a passacaglia, a variation structure over a repeating bass line typically employed by composers during the time of Bach. The theme and each of its 30 variations take exactly eight measures apiece in the score, for a total of 248 measures. After four transitional bars, there follows a passionate coda of a final 59 measures.

The initial passacaglia theme is presented by the woodwinds, timpani and the brass section, which now includes the trombones for the first time in the symphony. The variations may be divided into three principal sections, with variations 12–15 forming a calmer central group.

The Fourth Symphony was performed by the Vienna Philharmonic at Brahms’ final public appearance in March 1897. The audience and the orchestra members gave the dying composer a prolonged ovation which reduced him to tears. He died a month later.