The cello concerto of Antonín Dvořák is unsurpassed in the repertory of works for cello and orchestra and was the final composition of his stay in America; Arlen Hlusko debuts with the ESO in this passionate memorial to a lost love. Tragic love is also the hallmark of Tchaikovsky’s first masterwork, his Romeo and Juliet.

Transcend, by the Chinese-American Zhou Tian, commemorates the 150th anniversary of the completion in 1869 of the transcontinental railroad and honors the Chinese and Irish immigrants who suffered during its construction. The ESO is proud to have been a member of the consortium which commissioned Transcend. 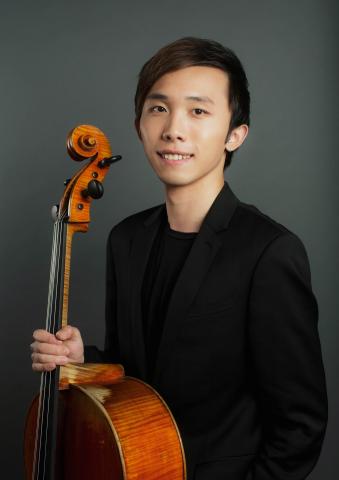 Arlen Hlusko has been replaced by Sihao He. He has already won numerous awards and has a close connection with Evanston. He has a Master’s Degree from the Bienen School of Music at Northwestern University, and is currently studying there for his D.M.A. degree under the tutelage of Hans Jorgen Jensen.

Meet our soloist, Sihao He, at Musical Insights. He and our Maestro Lawrence Eckerling and David Ellis will explore the concert program in depth.

The Evanston Symphony has participated in a number of consortiums to help underwrite new orchestral compositions. Our latest is “Transcend,” and the composer, Zhou Tian, has given us the following program note.

Two years ago, I was delighted to have been invited to compose a new work commemorating the 150th anniversary of the First Transcontinental Railroad’s completion in May 2019. When I learned that 13 American orchestras — many of which located along the route of the Railroad — would join forces together to commission and premiere this new work across the country, I was truly honored, as I knew the significant cultural impact this project would entail.

Begun in 1862 and completed in 1869, the Transcontinental Railroad effectively linked the U.S. from east to west for the first time. Its cultural heritage includes the contribution of a thousands-strong Chinese and Irish workforce who toiled in severe weather and cruel working conditions. Numerous “hell on wheels” towns, as described by the Linda Hall Library, “proliferated along the construction route and became famous for rapid growth and infamous for lawlessness.” As the settlements pushed westward, there was a mixing of ethnic groups and cultures. Unfortunately, as the daunting task of laying tracks over difficult terrain increased, many workers perished, and many of the rest were denied the American dream by the enactment of the Chinese Exclusion Act in 1882. But those who stayed brought traditional art and music into the fabric of American culture.

As a Chinese-born composer who immigrated to this country, educated at the nation’s top music schools, and now serving at one of its finest institutions, I was moved to create this new work to tell a musical story, to celebrate human perseverance, and to pay tribute to my own cultural heritage.

Transcend is composed of 3 movements, in which the epic and intimate passages go hand-in-hand in evoking the darkness and lightness, as if going through tunnels on a fast train.

The first movement, “Pulse,” starts with serene strings that remind me of the expansive desert of Utah and Nevada. The music grows patiently and eventually bursts into a constant pulse of 152 BPM. The violent, percussive poundings that occur from time to time are like blasts of dynamite, evoking the tension and suspense of man versus nature.

“Promise,” a meditative second movement, is a vocalise for those who sought for a better future. Lyrical woodwind solos, dashing flute and harp, and plush strings are met with traditional Chinese folk music-inspired melodies and misty harmonies.

The finale, “D-O-N-E,” is based on the rhythm of the word “done” in Morse code. This single word was sent across the United States via one of the first nationwide telegraphs, when the Railroad was completed in 1869. (A quick shout-out to Raleigh, a railroad worker of 30 years in Omaha, for giving me the true story that inspired this movement!) Throughout the finale, “done” is passed back and forth to numerous instruments in the orchestra. An accumulation of materials sends the piece to a climax at the end.

Tchaikovsky used the title: overture fantasy four times, each for a descriptive symphonic poem. Romeo and Juliet is the best known and most popular of the four works. Three major themes dominate the overture-fantasy. The solemn opening section for woodwinds invokes the sympathetic religious figure Friar Lawrence, the mood suggesting forthcoming doom. This gives way to the turbulent warfare between the Montagues and the Capulets, whose quarrel over the match between their children leads to their downfall. But the feud (which will later interrupt often) quiets down temporarily to make way for the beautiful love theme introduced by the violas and English horn. The peace is a brief one, the battles resume, and after a final passionate love scene, an extended elegy, punctuated by the kettle drum’s dirge-like beat, brings the story to a tragic close.

CELLO CONCERTO IN B MINOR, OPUS 104

A survey of musicologists, music critics and conductors asking “What is the greatest symphony” would generate a wide variety of responses with no clear consensus. There would be no more unanimity if “symphony” were replaced by “piano concerto” or “violin concerto” or “opera.” The one musical genre with a clear choice for “the greatest” is the cello concerto, with the one by Dvořák the definite winner. It dates from 1894–1895, and is the last of the works he composed in the United States during his three year tenure as the Director of the National Conservatory of Music in New York City (the “New World” Symphony was the first of his “American” works). This concerto might be thought of as a symphony with an important cello solo; the orchestra is large, including three trombones and tuba, the soloist does not play in either the first four minutes or in the final 17 measures, and the soloist is given no cadenzas. (A cadenza is a long passage near the end of a movement when the orchestra stops and the soloist is provided an opportunity for a display of virtuosity).

I. Allegro. The opening march-like theme is given to the woodwinds and lower strings, and is followed by one of music’s most beautiful horn melodies. Both themes are then given over to the solo cello, before an orchestral outburst leads to the development section, which is almost exclusively devoted to varying the opening march theme. Dvořák departs from normal classical practice by recapitulating the second theme ahead of the first theme.

II. Adagio ma non troppo. This slow movement introduces autobiography into the concerto. The quiet opening is interrupted by a loud orchestral preface to a new theme, a quotation of one of Dvořák’s Four Songs, op. 82. This song was a particular favorite of his sister-in-law Josephina, with whom he remained close despite her having spurned his advances and married a wealthy count some 25 years previously. Dvořák inserted this theme after Josephina wrote him in late 1894 saying that she had little left to live for.

III. Finale. Allegro moderato. Another march theme, and the addition of the triangle to the orchestra, opens the finale. Several themes alternate in a standard rondo form until a series of brass chords usher in the nostalgic coda. After the death of Josephina (aged 47) in 1895, Dvořák revised and lengthened this coda to recall themes from the first two movements as well as another brief reference to Josephina’s song. The original dedicatee of the concerto, the cellist Hanus Wihan, requested and then tried to insert a cadenza near the end, but Dvořák adamantly refused to alter his tribute to his former love.