The ESO’s celebration of the 250th birthday of Ludwig van Beethoven will span both this season and our following 75th Diamond Anniversary season. The “Emperor” concerto marked the culmination of Beethoven’s heroic period, and will provide Inna Faliks an ESO sequel to her much praised interpretation of the Beethoven Third Concerto. The program begins with Beethoven’s final overture, a tribute to Handelian pomp and glory, and concludes with Beethoven’s most serene and lyrical symphony, the “Pastoral.”

Musical Insights Free Pre-Concert Preview the Friday before this concert.
HAS BEEN CANCELLED 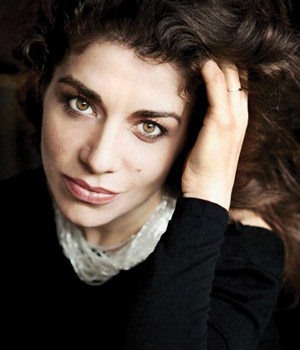 “Adventurous and passionate” (The New Yorker) Ukrainian-born American pianist Inna Faliks has made a name for herself through her commanding performances of standard piano repertoire, as well genre-bending interdisciplinary projects, and inquisitive work with contemporary composers. After her acclaimed teenage debuts at the Gilmore Festival and with the Chicago Symphony Orchestra, she has performed on many of the world’s great stages, with numerous orchestras, in solo appearances, and with conductors such as Leonard Slatkin and Keith Lockhart.  Faliks is currently Professor of Piano and Head of Piano at UCLA.

Highlights of recent seasons include performances at the Ravinia Festival and the National Gallery in DC, recital tours of China, with appearances in all the major halls such as Beijing Center for Performing Arts, Shanghai Oriental Arts Theater and Tianjin Grand Theater, as well as acclaimed performances at the Festival Intenacional de Piano in Mexico, in the Fazioli Series in Italy, in Israel’s Tel Aviv Museum, at the Portland Piano Festival, with the Camerata Pacifica, with the modern dance troupe Bodytraffic at the Broad Stage Santa Monica, and the Jacaranda Series in Los Angeles, where she performed Rzewski’s The People United Will Never Be Defeated. Faliks has been featured on WQXR, WNYC, WFMT and many international television broadcasts and has performed in many other major venues such as Carnegie Hall, Met Museum, and Moscow’s Tchaikovsky hall. She collaborates with and premieres music by some of today’s most important composers such as Billy Childs, Richard Danielpour, Timo Andres and Clarice Assad. She is known for her poetry-music series Music/Words, and has collaborated with many important poets. She regularly tours with her monologue-recital Polonaise-Fantasie, the Story of a Pianist, which tells the story of her immigration to the United States from Odessa. This has been recorded on Delos; other acclaimed recordings include all-Beethoven, and Rachmaninoff/Ravel/Pasternak discs for MSR Classics. Upcoming recordings include Reimagine Beethoven and Ravel (nine world premieres) on Parma, the Master and Margarita project (with three world premieres) and Liszt Sonata in B Minor, on Sono Luminus. These programs will be performed nation-wide in 2020-2021.

Faliks is also a writer—her article on China and classical music was recently published by the Washington Post. Inna Faliks is a Yamaha Artist, and is represented by John Gingrich Management. She last appeared with the Evanston Symphony Orchestra in April 2016 playing Beethoven’s Third Piano Concerto.

Beethoven's Symphony No 6 "Pastoral" with the Royal Concertgebouw Orchestra and Ivan Fischer.

This is the first of two concerts devoted entirely to the compositions of Ludwig van Beethoven, in commemoration of the 250th anniversary of his birth in Bonn, Germany. The second concert will be performed April 25, 2021.

CEREMONIAL BEETHOVEN. OfBeethoven’s 11 overtures, three are notable for having a playing time over 10 minutes and adding trombones to the standard Classical orchestra: the Leonora Overtures Two and Three and The Consecration of the House. “The House” was the Josephstadt Theater in Vienna, whose opening in October 1822 resulted in the commission for this overture. The Consecration of the House Overture was also the opening work on the concert of May 1824 which included the premiere of Beethoven’s Ninth Symphony.

The Consecration of the House Overture has never gained the standing of the Third Leonora Overture despite the praise of writers on the order of Donald Francis Tovey, who declared it “one of Beethoven’s grandest and least understood works, especially as its forms and procedures have never been anticipated or imitated either by Beethoven or anybody else.” It opens with a slow march followed by brass fanfares accompanied by scurrying bassoons. The main body of the work is a large fugue which for many commentators evokes Handel and Bach.

HEROIC BEETHOVEN. The origin of the title “Emperor” is unknown; but the title definitely was not Beethoven’s. However, the concerto is definitely in Beethoven’s “heroic” mode of composition. The key of E-Flat has typified heroism since his Symphony No. 3, the “Eroica” of 1804, and this key would have been appropriate in 1809 Vienna, which was under fire from the forces of the Emperor Napoleon (which is why Beethoven would never have given that title to his largest piano concerto).

I. Allegro. The imposing beginning features the immediate entrance of the solo piano with a virtuosic cadenza accompanied by three widely spaced chords in the orchestra. The principal theme follows with major usage of the horns and the timpani. The second theme is first heard  on the woodwinds but later becomes a march on the strings. This movement, at 20 minutes, occupies over half of the concerto’s total playing time.

II. Adagio un poco moto. The slow movement (B Major) presents a wide contrast to the preceding heroics with a chorale type theme on the muted strings, to which the piano responds with a quiet espressivo. The feeling of quiet awe continues until the key changes and the piano presents a preview of the final movement.

III. Rondo. Allegro. The solo piano continues without a pause, now in E Flat and fortissimo, presenting the main theme of the finale. The structure of the movement is that of a rondo, with three contrasting themes in the order ABACABA. The end features a dialogue between the piano and timpani before a final statement of the principal theme.

BUCOLIC BEETHOVEN. Beethoven composed his Fifth and Sixth Symphonies at approximately the same time, and both were premiered at the historic Vienna concert of December 22, 1808 which also included his Choral Fantasy and Fourth Piano Concerto. While the Fifth Symphony epitomes struggle, stress and victory, the Sixth is its polar opposite, probably the most relaxed of all of Beethoven’s works.

The very title “Pastoral” places the symphony within a musical tradition of depicting nature and happy peasantry and farmers. Beethoven attached the titles shown below to the five movements, but he also wrote “more an expression of feeling than painting”, and “All painting in instrumental music, if pushed too far, is a failure.” Therefore Beethoven preserved standard symphonic forms for the individual movements, as described below, but the symphony has five movements instead of the normal four, and the last three movements are played continuously, as indicated by the dashes following the third and fourth movement titles on the program page. The “Pastoral” is notable in Beethoven’s output for using major keys almost exclusively, with the exception of the Storm.

I. Allegro ma non troppo. Awakening of Cheerful Feelings Upon Arriving in the Country. Beethoven’s title describes the movement perfectly. Although in standard sonata form, the second theme flows so naturally that the normal contrast of a second theme is difficult to perceive.

II. Andante molto moto. Scene by the Brook. Muted strings begin this gentle movement in the key of B Flat Major, also in sonata form. The end of the movement features three bird calls, specified in the score as: nightingale (flute), quail (oboe), and cuckoo (clarinet).

III. Allegro. Merry Gathering of Country Folk. This is a scherzo movement with two contrasting “trio” sections, one depicting a village band with a second bassoon who can only play three notes, and the second trio a stamping dance from the strings. The trumpets enter for the first time, and then a reprise of the opening theme leads directly to…

IV. Allegro. Thunder. Storm. The timpani are unleashed and the solo piccolo shrieks as the storm brings the first significant music in a minor key (F Minor). Two trombones, rather than the normal three are added later within the movement. The storm dissipates and a rising scale on the flute moves into…

V. Allegretto. Shepherd’s Song—Happy and Thankful Feelings After the Storm. A return to F Major and a shepherd’s call on the solo clarinet lead to a radiant song of thanksgiving on the strings. The structure of the finale is much like that of the first movement with similar first and second themes and usage of major key harmonies. A muted solo horn ends the symphony, the only time Beethoven ever used this effect.