The vocal virtuosity of local favorite Michelle Areyzaga and of the North Shore Choral Society will assist in the ESO’s celebration of the 100th birthday of Leonard Bernstein, America’s greatest musical genius. A short overture by John Williams based on Bernstein melodies completes the tribute. The concert concludes with the great choral blockbuster, Carl Orff’s Carmina Burana, which combines haunting Medieval and Renaissance melodies with a large percussion laden orchestra. 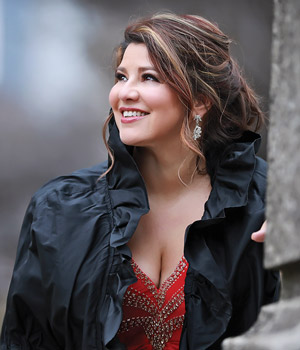 As a coveted performer with a diverse repertoire, American soprano Michelle Areyzaga is held in high regard by orchestras and opera companies throughout the United States and abroad, appearing in leading roles with Chicago Opera Theater, Lyric Opera of Chicago’s In the Neighborhoods programs, Opera Birmingham, Ravinia Festival, and Orquesta Sinfónica del Estado de México.

Her association with the music of Leonard Bernstein runs deep. She has become well known for her interpretation of his delightful and moving music – from her portrayal of Cunegonde in Candide to her participation in varied programs featuring his works, including musical theater and chamber music/recital works. Areyzaga is still often heard performing Bernstein, such as her performances in Las Vegas and at Ravinia in conjunction with the composer’s centennial celebration.

Known as a foremost interpreter of vocal art song and chamber music, Ms. Areyzaga has been a repeat guest of the New York Festival of Song, the Chamber Music Society of Lincoln Center, the Chicago Ensemble, as well as Chicago’s Dame Myra Hess Memorial Concert Series.

As a recorded artist, she has performed song cycles by Gwyneth Walker on The Sun Is Love (Proteus). Other recordings include Songs from Spoon River (Cedille) by Lita Grier and The Small Hours, songs by William Ferris.

Ms. Areyzaga made her European concert debut as soloist in Vaughan Williams’ Mass in G Minor at England’s York Minster Cathedral, Ely Cathedral, and St. Mary’s Church in Oxford. She has been named “Artist of the Year” by Pioneer Press and has been an award recipient from the Julian Autrey Song Foundation. She received her B.A. in Vocal Performance from Roosevelt University with honors and was a member of Ravinia’s Steans Institute for Young Artists.

Tenor Peder Reiff has garnered recognition for his naturally warm and clear voice, great range, musicianship, and stage presence.  As a Master’s Degree student at Indiana University, Peder studied under world-famous bass-baritone Giorgio Tozzi and currently holds the record for appearing in more operas (seven) in a single season than any other student who has attended the school.

On the opera front, Peder has been seen performing throughout the country with companies such as Chamber Opera Chicago, Opera Illinois, L’Opera Piccola, Opera for the Young, the Chautauqua Opera Company, and the Seagle Music Colony.  Favorite roles include Nemorino in The Elixir of Love, Ferrando in Cosí fan tutte, and Eisenstein in Die Fledermaus.

Christopher Magiera has been noted for his “manly, vibrant baritone of uncommon distinction” (Opera Today) and was praised by The New York Times for his performance as the Captain in The Death of Klinghoffer. Mr. Magiera has been seen on stages throughout the world in leading baritone repertoire with renowned conductors such as Kent Nagano, Asher Fisch, Vladimir Jurowski, and Emmanuel Villaume.

Notable and acclaimed performances of Mr. Magiera's include The Captain in John Adams' The Death of Klinghoffer with the English National Opera and Opera Theatre of Saint Louis; Valentin in Faust and Zurga in Les Pêcheurs de Perles with Santa Fe Opera; the title role in Eugene Onegin with Opera Theatre of Saint Louis; Figaro in Il barbiere di Siviglia, Conte Almaviva in Le nozze di Figaro, and Papageno in Die Zauberflöte with the Dresden Semperoper; and the title role in Don Giovanni with Opera Colorado.

In concert, Mr. Magiera has appeared in the title role of Eugene Onegin with Kent Nagano, in Carmina Burana with the Bilkent Symphony Orchestra of Ankara, Turkey, in the Richard Tucker Gala at Avery Fisher Hall, and has performed numerous Bach Cantatas.

Highly decorated by national and international competitions, Mr. Magiera was a National Grand Finalist in the Metropolitan Opera’s National Council Auditions, a finalist in Placido Domingo’s Operalia World Opera Competition, and a Grand Prize winner of the Sullivan Foundation.

Mr. Magiera is a former member of the Opernstudio at the Bayerische Staatsoper, where he appeared in a variety of mainstage operas including Lucrezia Borgia, Palestrina, La bohème, Lohengrin. He attended the prestigious Yale School of Music and is a graduate of the Peabody Conservatory and Wake Forest University, from which he graduated with honors and distinction.

Maestro Lawrence Eckerling and David Ellis will explore the May concert program in depth.

Orff's Carmina Burana from the 1994 Proms in Royal Albert Hall.

Leonard Bernstein conducts his Chichester Psalms with the Israel Philharmonic in Berlin, 1977.

A DOUBLE BIRTHDAY CELEBRATION. The current season, beginning in 2018, has marked world-wide celebrations of the 100th anniversary of the birth of Leonard Bernstein. This concert is part of these festivities and it opens with a tribute by composer John Williams which was part of the 70th birthday gala for Bernstein at the Tanglewood Festival. The title of this short piece has been revised several times, the most descriptive of which is Variations on Themes of Leonard Bernstein, the most recognizable of which are “New York, New York” from On the Town and “America” from West Side Story.

A COLORATURA DELIGHT. Leonard Bernstein’sCandide is among his most popular and enduring compositions, with at least seven distinct versions detailed on the official Bernstein website. Much of the music is consistent across all versions, but the words have included a minimum of six different authors. The overture to Candide is a staple of the concert repertoire (it is included on the ESO’s CD), and it gives prominence to this aria, a favorite showpiece for coloratura sopranos. Cunegonde, the “heroine,” laments her loss of innocence and virtue but decides to take pleasure in her glittering diamonds and sapphires — “If I’m not pure, at least my jewels are!”

BERNSTEIN’S MOST ENDURING CONCERT WORK. Bernstein’s Chichester Psalms was written on a commission by the Chichester Cathedral for their 1965 Choir Festival. The Very Reverend Walter Hussey, Dean of Chichester Cathedral, corresponded with Bernstein about the Festival and mentioned Psalm 2 in particular; he also suggested “I think many of us would be very delighted if here was a hint of West Side Story about the music.” Because the Cathedral’s space for an orchestra was limited, the orchestra consists of strings, three trumpets and three trombones, timpani with a large group of percussion instruments and two harps.

Bernstein’s score specifies that the composition should be sung in Hebrew, and he obtained the full cooperation of the Rev. Hussey in the preparation of the Church of England choirs. Bernstein spent much of his compositional time experimenting with 12 tone music but “after six months I threw it all away. It just wasn’t my music; it wasn’t honest. The end result was the Chichester Psalms which is the most accessible, B-Flat majorish tonal piece I’ve ever written.” The Oxford Companion of Western Music refers to the Psalms’ “popularity that, it is safe to say, no other classical composition of the decade ever approached.”

I. Psalms 108 and 100 (complete) The opening, asingle verse of Psalm 108, presents a somewhat dissonant theme which will recur at the beginning and end of the third movement. It is succeeded quickly by an energetic and percussive setting of “Make a joyful noise unto the Lord all ye lands.”

II. Psalms 23 (complete) and 2 The most famous of all the psalms — “The Lord is my shepherd, I shall not want” — is sung by the boy soloist to the accompaniment of the harp. A contrasting central section “Why do the nations rage” (four verses from Psalm 2) uses music cut from the opening of West Side Story. Psalm 23 returns but is underlain by recalls of Psalm 2.

III. Psalms 131 (complete) and 133 An orchestral introduction recalls the dissonant theme from the first movement, but the entry of the chorus brings the return of major key melody and the emotional climax of the work. A single verse from Psalm 133 “Behold how good and how pleasant is for brethren to dwell together in unity” resolves the dissonant opening into consonant unity.

A CHORAL BLOCKBUSTER.  The title refers to a collection of medieval texts from the region south of Munich, Germany first published in 1847. The Munich composer Carl Orff set 24 of these songs in 1935–36 for large chorus, children’s chorus, three vocal soloists, and large orchestra. The musical style is deliberately “primitive” using ostinato rhythms, simple melodies and harmonies, and extensive percussion (including two pianos). The combination of simplicity with immediately memorable tunes has resulted in what critic Michael Steinberg has called “one of the few box office certainties in twentieth-century music.”

FORTUNA IMPERATRIX MUNDI. The opening “O Fortuna” chorus, representing the turning of the wheel of fortune, has attained iconic status through its media usage. Its circular nature is emphasized by its exact repetition as the final number of the score.

I. PRIMO VERE/UF DEM ANGER. In Springtime/On the Green represents a lightening of themood with a number of catchy tunes, primarily for the chorus and orchestra. There are no breaks between the individual numbers in this or in the other sections headed by a Roman numeral.

II. IN TABERNA. In the Tavern is a collection of male drinking songs. No. 12, the song of the roasted swan, is the only solo for the tenor and is renowned for its difficulty.

III. COUR D’AMOURS. The Court of Love marks the appearances of the solo soprano and thechildren’s chorus. “In Trutina” (No. 21) is the soprano highlight of the score, while “Veni, veni, venias” (No. 20) with its piano and percussion scoring displays the influence of Stravinsky’s Les Noces on Orff.

BLANZIFLOR ET HELENA. This hymn of praise for full chorus leads directly into the restatement of “O Fortuna.”