The First Piano Concerto of Johannes Brahms is among his most important works and among the most difﬁcult concertos ever composed. Its monumental nature is a direct descendent of another D Minor masterpiece, Beethoven’s Ninth Symphony. Thomas Pandolﬁ makes his ESO debut in its demanding solo role. Igor Stravinsky’s Firebird ballet is based on Russian folk legends and gave him his ﬁrst major acclaim, and it has remained his “biggest hit” ever since its premiere in 1910. Stravinsky compiled several suites from the music for the complete ballet, and our season concludes with the longest of those suites, prepared in 1945. 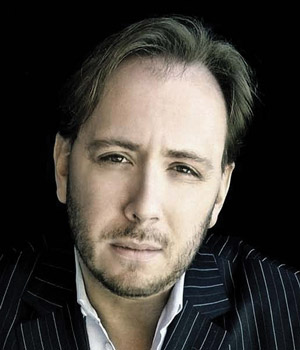 American pianist Thomas Pandolfi is an exciting virtuoso who, with each passing season, is becoming more and more sought after by audiences worldwide, and showered with superlatives by critics for his passionate artistry and amazing technique.

During 2016–17, he was also a guest soloist with The Paducah Symphony, the Charlotte Symphony (FL), the Washington Metropolitan Philharmonic, the Amadeus Orchestra, The Tiraspol Philharmonic, The Alexandria Symphony, and the Maryland Symphony at The Garrett Lakes Arts Festival. Thomas was the Artist in Residence at The Black Rock Center for the Arts in Maryland, and his recital touring schedule took him across the United States on a twenty state tour. Thomas’ international concerts have included those in China and Europe, and last season, he also made his Canadian debut in British Columbia.

An outstanding cross-over artist, Thomas’ virtuoso transcriptions of the music of Andrew Lloyd Webber, Marvin Hamlisch, George Gershwin and Leonard Bernstein are in much demand.

Pandolfi earned both his Bachelor’s and Master’s degrees from the legendary Juilliard School as a scholarship student. He is the proud father of a wonderful son and daughter, and resides in Washington, DC.

Performed by the Symphony of Southeast Texas. Haydn's famous Farewell Symphony ends with the musicians departing from the stage until none remain; Corigliano reverses that process in this overture..

Andreas Delfs conducts Stravinsky's Firebird Suite in its 1945 version, which will performed at our concert. This version contains more music than the 1910 and 1919 versions of the suite..

HAYDN’S “FAREWELL” SYMPHONY REVERSED. John Corigliano was born into a musical family; his father was the concertmaster of the New York Philhamonic for 23 years. He has won the Pulitzer Prize, the Grawemeyer Award for Music Composition, five Grammy Awards and an Oscar for The Red Violin. He was the first composer in residence for the Chicago Symphony Orchestra, during which tenure he composed his Symphony No 1, inspired by the AIDS epidemic.

Theatricality and accessibility have been keynotes of his orchestral works and this Promenade Overture is no exception. The composer was “caught off guard by Haydn’s delightful “Farewell” Symphony, in which the orchestra is gradually reduced until only two violinists remain, and then they too depart. Corigliano reverses this process as he explains:

“Offstage brass announce the start of this work, with the trumpets playing the last five measures of the “Farewell” Symphony-backwards. This forms a fanfare announcing the promenade of performers, which starts with the piccolo, concludes with the tuba, and contains a variety of motives which eventually form a lyrical melody that is built to a climax by the full orchestra.”

THE BEETHOVEN’S NINTH OF PIANO CONCERTOS. Brahms left his native Hamburg in 1853 for Dűsseldorf where he met and took up residence with Robert and Clara Schumann. Two major events transpired in early 1854: in February Schumann attempted suicide by jumping into the Rhine, and in March Brahms heard for the first time Beethoven’s Symphony No. 9 in D Minor.

Brahms almost immediately started his own symphony in D Minor, composing it for the medium of two pianos. This work was never completed, but its first two movements became the same movements in the Piano Concerto No. 1 and its third movement eventually was transformed into the second movement of the German Requiem- “Denn alles fleisch.”

I. Maestoso. The opening for orchestra alone is among the most powerful in the music literature, and evokes the climax (recapitulation) of the first movement of the Beethoven Ninth. The concerto as a whole is among the longest ever composed and in a classical structure. The development section is heralded by virtuoso octaves for the soloist, and the soloist also starts the recapitulation, playing the opening orchestral theme over the rolling timpani. This movement, in keeping with its symphonic nature, does not include a true cadenza, but the other two movements do provide cadenzas.

II. Adagio. The slow movement takes the character of a benediction (a heading at one time over the opening notes) in D Major, but with an agitated central section.

III. Rondo: Allegro non troppo. The rondo form is standard in concertos from Mozart on, and its variety includes a fugue in the center, beautiful reflective moments near the end, and one of the most dynamic endings of any concerto.

SUITE FROM THE FIREBIRD

THE BALLET THAT SAVED BALLET.   In the spring of 1909 the great Russian impresario Serge Diaghilev was facing potential disaster. In 1906, with the financial backing of the Russian crown, Diaghilev had initiated an annual “Russian Season” bringing Russian art to Paris which had reached a height in popularity with opera in 1908: the great bass Fyodor Chaliapin in Rimsky’s glittering orchestration of Mussorgsky’s Boris Godunov.  Diaghilev was committed to opera going forward, but in February 1909 the Grand Duke Vladimir Alexandrovich, the uncle of the Tsar and the source of the crown subsidy of the “Season”, died without warning. The 1909 season of grand operas had to be replaced by three part programs which surrounded a single act of an opera with two (or more) ballets. The ballets proved highly successful financially (all of the ballet soloists combined cost less than Chaliapin), but the quality of the music was deemed weak and lacking in national qualities. And the season as a whole lost money due to the costs of the operas.

So in 1910 Diaghilev was forced to plan a season solely dedicated to ballet, and he needed a new ballet with authentically Russian music and theme, or as Richard Taruskin puts it: “…the Russian ballet, originally a French import and proud of its artistic heritage, now had to become stylistically “Russian” so as to justify its exportation back to France.” Diaghilev asked several well known composers to supply the required score without success, eventually settling on the young and relatively unknown Igor Stravinsky.  The story of The Firebird conflates several Russian motifs including a young Tsarevich, a Princess of Great Beauty, the evil magician Kastchei the Immortal, and the Firebird with its enchanted feather.

The 1910 premiere was a huge success, both for the Ballets Russes and Diaghilev, and particularly for Stravinsky, who became possibly the most important composer of the 20th century, and the only one whose standing is founded on music for ballet, which include the Rite of Spring and Petrushka in addition to The Firebird.

The full Firebird ballet is scored for an extremely large orchestra with extra brass and lasts about 45 minutes. Stravinsky created a suite in 1911 with this full orchestration but a much shorter duration, followed by a 1919 suite with a reduced orchestra and 25 minutes duration, and then in 1945 his third version, lasting 30 minutes and the one which he conducted and recorded. This 1945 version is the one performed at this concert. The order of the selections is shown on the program page and follows their sequence in the full ballet. The introduction shows the young Tsarevich exploring a dark forest. The Firebird darts across the stage but is caught by the Tsarevich, who intends to kill her but eventually releases her, so she gives him a magic feather. Thirteen princesses enter and the Tsarevich and the Princess of Great Beauty immediately fall in love. The beasts and minions of the evil Kastchei are aroused and perform their infernal dance, but the Tsarevich uses the magic feather to summon the Firebird, who puts Kastchei’s followers to sleep (the Lullaby). The Tsarevich discovers an egg containing Kastchei’s soul and shatters it (this music is not included in any of the suites). In the finale, twelve warriors previously petrified by Kastchei regain their human form and join the Princesses to celebrate the marriage of the Tsarevich and the Princess of Great Beauty.