Phenomenal virtuoso Jeffrey Biegel debuts with the ESO in the blockbuster of all piano concertos, the Third Concerto of Rachmaninoff. The 1996 film Shine was built around the struggles of pianist David Helfgott with the mental and pianist challenges posed by this epic concerto. Prokofiev’s concert suite drawn from his 1934 score for the Soviet film Lt. Kije is a long-time favorite, and the program concludes with another concert suite, prepared by composer John Williams from his blockbuster Star Wars. 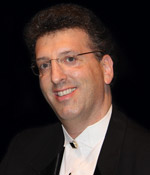 in the legendary 1982 performance by Martha Argerich and the Berlin Radio Symphony conducted by Riccardo Chailly.

Main Theme with Franz Welser-Most and the Vienna Philharmonic.

Princess Leia's Theme and the Imperial March with Franz Welser-Most and the Vienna Philharmonic.

Throne Room and Finale with Gustavo Dudamel and the LA Philharmonic

CONCERTO NO. 3 FOR PIANO AND ORCHESTRA IN D MINOR, OP. 30

Rachmaninoff composed his Third Piano Concerto in 1909 while living in Dresden. A prodigious virtuoso, he was planning his first concert tour of the U.S and felt that he needed a new concerto to supplement his already very popular Second Piano Concerto. His US tour began at Smith College in Massachusetts with his first ever solo piano recital. This was followed by the premiere of the Third Concerto in late November with the New York Symphony conducted by Walter Damrosch, a performance not universally praised. The concerto finally received a great performance with Rachmaninoff as soloist with the New York Philharmonic conducted by Gustav Mahler on January 16, 1910, a date unfortunately before recordings.

Allegro ma non tonto.  The opening theme steals in simply over a simple accompaniment in the strings. The second theme is announced by rhythmic repeated chords typical of Rachmaninoff, followed by an expansive lyrical melody. The development begins with the opening theme played with one note lowered and with muted horn accompaniment. The development culminates in a huge solo cadenza which occupies five full pages of the score. Soft solo recollections of the opening by flute, oboe and horn briefly overlay the piano solo before the cadenza is resumed. The true recapitulation then follows with the opening passage of the movement.

Intermezzo. The slow movement is actually marked Adagio and the opening portion of the movement gives the soloist a much needed (partial) rest. The central part of the Intermezzo is a sort of quick scherzo contained within the slower outside parts. The very end of the movement constitutes a transition to the finale, which follows without a break.

Finale.  This finale is among the most exciting piano concerto movements ever written, and its length and power create an “end-weighted” structure possibly unique among piano concertos. It alternates the propulsive opening theme with one of Rachmaninoff’s longest—spanned melodies. The opening theme of the first movement is played on the violas and cellos in the middle of the movement, but the momentum resumes and the work ends with a grand D Major restatement of the lyrical second theme and finally, Rachmaninoff’s four note signature rhythm.

The extreme difficulty of this concerto was a key plot element of the 1996 movie Shine , which won the “Best Actor” Academy Award for Geoffrey Rush.

The Russian Revolution of 1917 led to the departure/exile of three eminent composers: Rachmaninoff, Prokofiev, and Stravinsky. Prokofiev eventually made his way to the US and premiered two major compositions in Chicago in 1921: the opera The Love for Three Oranges  and the Third Piano Concerto, in which he was the soloist with the Chicago Symphony Orchestra. However, financial success did not follow, so Prokofiev moved to Paris in 1922, where he lived until 1936 when he returned to the USSR, a great propaganda victory for the Soviet government. He gave his son a possible reason for his return: “I didn’t like to be Russian composer No. 2 in Europe after Stravinsky, and No. 2 in the U.S. after Rachmaninoff. I like to be No. 1, and that’s why I chose Soviet Russia.” (Ironically, to many musicians Prokofiev became No. 2 in Soviet Russia to Shostakovich.)

The film Lt. Kijé was a key element in the Soviet attempt to convince Prokofiev to return. Its score was composed in 1933 and 1934 and was his first commission from the Soviets and his first opportunity to compose film music. While composing Lt. Kijé he told a master class of Moscow Conservatory students that his current goal was to “compose music for the masses that would at the same time remain good music. My previous work on melody and the search for a ‘new simplicity’ have prepared me considerably for this.” The story line of the film concerns a fictitious Lieutenant created by the slip of a pen and the necessity to convince the Tsar of Kijé’s existence. Kijé is exiled to Siberia, returns a hero, marries, and eventually must die. Prokofiev’s actual film score consists almost entirely of brief fragments of under one minute in length, but in 1934 he assembled the Lt. Kijé Suite as an independent work. The suite has since served as a “meta-score” for many subsequent movies, most notably Woody Allen’s Love and Death.

The Birth of Kijé.  A distant fanfare played by the cornet is combined with parade ground brass and percussion.

Romance.  A melody sung in the film by a soprano with harp accompaniment is given primarily to the tenor saxophone.

Kijé’s Wedding.  When Kijé is married in the film the bride sits next to an empty chair.

Troika.  Sleigh bells highlight this drunken ride through the snow on a horse-drawn sled. This is sung in the film by a baritone.

The Burial of Kijé.  The opening cornet fanfare from Kijé’s birth returns, followed by flashbacks from the preceding movements of the suite, and then the cornet dying away.

John Williams is without a doubt the most successful composer of movie music in history. His first big hit was Jaws (1975), which was followed in 1977 by the original Star Wars (subsequently retitled A New Hope ) and The Empire Strikes Back in 1980. The suite in today’s concert was arranged by Williams using music from these two movies. The American Film Institute named Star Wars  the greatest American film score of all time, and its Main Title is probably the most instantly recognizable film theme in the world.