Evanston resident Tage Larsen has been a member of the vaunted brass section of the Chicago Symphony Orchestra for over 15 years and he will share his virtuosity in the most popular of trumpet concertos, that of Franz Joseph Haydn. Grieg’s Holberg Suite for strings is based on Norwegian themes, while the short Gordon Jacob piece humorously uses melodies from Rossini’s opera of the same name. The program opens with one of Verdi’s greatest overtures, while the Pines of Rome provides the ultimate in Italian symphonic excitement. 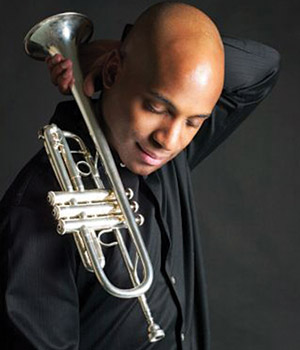 “There was always music playing at home when I was young.”

Tage Larsen was first hooked by his father’s recording of the Sibelius Second Symphony and its big brass fanfare at the end. His personal memories continue: I started studying trumpet in the fourth grade. My first teacher, Mr. Burnham, gave me my first instrument. It was all shiny and new. He taught me the fundamentals of good musicianship, including basic skills like sight-reading and music theory. Though I didn’t realize it at the time, these were so helpful to me as I grew older. I will admit that I didn’t love practicing all the time, but I learned to enjoy the challenges that it gave me and eventually I understood that it really was important to play every single day, just the way that Mr. Burnham taught me. As I grew older and improved bit by bit, my father encouraged me to explore all the opportunities that were available to me, including jazz band, youth orchestra, music festivals, and of course, private lessons.

I first heard the Chicago Symphony Orchestra live while I was a college student at Michigan State. I had heard recordings of the orchestra before, but hearing them in person was completely different. I remember that they played Bruckner’s Seventh Symphony. I could see the way the musicians worked as a team onstage. I was amazed by the balance and unity. I could hear how they matched each other and was blown away by that “Chicago Sound.” It had me on the edge of my seat! Seeing the musicians on stage made it feel more real and inspired me. I wanted to be part of that.

After many years of hard work, there are still challenges that I face. Even as a member of the Chicago Symphony Orchestra, there are still times that I still get discouraged. But I’ve learned that the best way to face the things that challenge me is to be patient and persevere. There’s so much to learn about music, I’m so glad that I have an entire lifetime to do it!

Studying music makes so many other parts of your life enjoyable and successful. I know that if I had decided not to be a musician, all the lessons that music helped me learn would definitely carry over into my life on a daily basis. It is the same kind of process no matter what goals you might have.

Learning music takes practice and patience, but it’s a wonderful thing to have in your life and it’s worth it when you love it! I always love seeing where music will take me.

The Overture to Verdi's I Vespri Siciliani. The Berlin Philharmonic and Claudio Abbado in Palermo, Sicily..

with Dima Sloboniuk and the Sinfonia de Galicia.

SINFONIA OR PRELUDIO? Giuseppe Verdi, Italy’s most renowned composer, wrote 26 operas. His output can be divided into an early period from 1839-1850, which encompasses 16 operas, and a later period of 10 operas beginning with Rigoletto in 1851 and ending with Falstaff in 1893. I Vespri Siciliani (1855) was his nineteenthopera,but his first to be premiered at the Paris Opera,the centerof “grand opera”, meaning five acts, a major ballet, and a full overture. Therefore, I Vespri is preceded by a full symphonic overture, denoted by the title “Sinfonia” in the score, as contrasted by a “Preludio,” a modest beginning which Verdi favored for most of his mature operas. This overture and that to La Forza del Destino (1869) are the only “Sinfonias” created for his ten mature operas, and they are the two most highly regarded of all of Verdi’s overtures. The Vespri Overture is based on several themes from the opera, most notably a cello melody which provides the climax of the overture.

NORWEGIAN NEOCLASSICISM Edvard Grieg is Norway’s most renowned composer, and is best known for his nationalistic pieces such as Peer Gynt. However, the next work on our program is an example of neoclassicism titled From Holberg’s Time: Suite in the Olden Style. Grieg wrote this in 1884 as a piano suite to celebrate the 200th birthday of a playwright named Ludwig Holberg, and then transcribed it for string orchestra the following year. It consists of five short movements in the style of a Baroque dance suite. The majority of the movements are in ABA form, with two contrasting sections followed by a repeat of the first section. The third movement Gavotte has an entirely different dance form, a Musette, as its central section.

HAYDN’S MOST POPULAR CONCERTO Haydn is knownas the father of both the symphony and the string quartet, with 107 of the former and 83 of the latter in his catalog. However, the concerto form was not a major focus of his composing career; roughly ten concerti are played or recorded with any frequency, the most important of which are two for the cello and this single concerto for the trumpet.

Haydn composed this concerto in 1796 for a friend named August Weidinger, who had developed a type of trumpet (really a bugle) using keys in an attempt to expand the notes playable on the instrument. Weidinger’s efforts failed; the trumpets used by today’s orchestras were first developed around 1830. However, Haydn’s work with its readily accessible tunes has survived as the most performed of any trumpet concerto.

AN OVERTURE BASED ON AN OVERTURE (BUT NOT ITS OPERA) The overture to Rossini’s TheBarber of Seville is a “Sinfonia,” but it was not composed for that opera but rather an earlier effort. So when Gordon Jacob, a British orchestrator/arranger/pedagogue composed his parody overture The Barber of Seville Goes to the Devil, he was satirizing the overture but not the opera, because the overture contains no music from the actual opera. Jacobs takes familiar themes from the original overture and devilishly alters harmonies and dynamics, plays the themes simultaneously, transforms the nature of the themes, and so forth. The work was commissioned by the BBC Concert Orchestra in 1960, and it makes these satirical effects so successfully because the original themes are so well known and recognizable.

ROMAN TRIUMPHALISM. Although he wrote ten operas,Ottorino Respighi is recognized as Italy’s leading orchestral composer. While serving as principal violist of the Mariinsky Theater in St. Petersburg in the period 1900–1903, Respighi studied orchestration with Nicolai Rimsky-Korsakov, the acknowledged master of instrumental knowledge. The result, according to Richard Taruskin, was that “As an orchestral colorist Respighi was rivaled during his lifetime only by Ravel.”  Respighi’s international stature is based primarily on his “Roman trilogy”: The Fountains of Rome (1917), The Pines of Rome (1924) and Roman Festivals (1928). Each tone poem contains four sections, played continuously, depicting various aspects of Rome. Respighi included descriptions as a part of the score, and they are excerpted below, shown in italics.

I. Pines of the Villa Borghese. Children are at play in the pine groves of Villa Borghese; they dance round in circles…they come and go in swarms. Suddenly the scene changes, and

II. Pines Near A Catacomb. Respighi composed many works using Gregorian chant, which includes this section depicting the caves beneath Rome where the early Christians took refuge against persecution. From the depths rises the sound of mournful psalmsinging, floating through the air like a solemn hymn…

IV. Pines of the Appian Way. Misty dawn on the Appian Way…the muffled, ceaseless rhythm of unending footsteps. Trumpets sound and, in the brilliance of the newly-risen sun, a consular army…mounting in triumph to the Capitol. This march is among the great crescendos in music. Respighi’s trumpets include four in the regular orchestra plus an additional six “buccini” (Roman trumpets), whose parts are normally taken by four trumpets and two trombones, which will be stationed in the loft above the orchestra.