The ﬁnal 12 symphonies of Franz Joseph Haydn are collectively known as his “London symphonies” and the ﬁnal one of the 12, to some the greatest of all, is titled the “London” Symphony. William Walton’s Crown Imperial has been wittily referred to as the “Pomp and Circumstance March No. 6” as a worthy successor to Elgar’s ﬁve Pomp and Circumstance marches. Britten’s orchestral showpiece can also be titled “Variations and Fugue on a Theme of Henry Purcell,” and will be narrated by Henry Fogel, Dean of the Chicago College of Performing Arts of Roosevelt University. 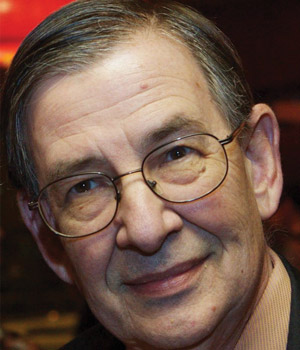 Henry Fogel was appointed Dean of the Chicago College of Performing Arts at Roosevelt University beginning in July, 2009, a school at which he has taught a course in orchestral studies since 2002. From 2003–2008 he was President and CEO of the League of American Orchestras, an organization that serves almost 1,000 symphony orchestras, and from 1985–2003, Mr. Fogel was President of the Chicago Symphony Orchestra, leading the organization through a period of enormous change. In addition to maintaining its artistic supremacy, the Chicago Symphony during Mr. Fogel’s term dramatically strengthened its community engagement and educational programs. From 1981–1985, Mr. Fogel was Executive Director of the National Symphony Orchestra of Washington, D.C., and from 1978–1981 he was Orchestra Manager of the New York Philharmonic. From 1963–1978, he was Program Director and Vice-President of WONO, a full-time classical music commercial radio station in Syracuse, New York.

He has received honorary doctorate degrees from Roosevelt University, Northwestern University, the Curtis Institute, and Columbia College in Chicago. In June, 2009, he received the highest honor in the symphony orchestra field, the League of American Orchestras’ Gold Baton Award. Mr. Fogel has also produced a number of internationally syndicated radio programs for Chicago’s Fine Arts Station WFMT, including currently Collectors’ Corner, which is derived from his extensive personal collection of over 25,000 classical recordings. Mr. Fogel lives in River Forest, Illinois with his wife Frances. They have two children, Karl and Holly, and five grandchildren. In addition to music, he also has a passion for cooking Chinese food, and he studied over three years with Virginia Lee, who wrote the New York Times Chinese Cookbook.

with the Auckland Symphony under Peter Thomas.

The Young Person's Guide to the Orchestra by Benjamin Britten with Jukka Pekka Sarastre and the WDR Symphony of Cologne.

NINE ENGLISH FOLK SONGS ARRANGED BY AN ENGLISHMAN.  Ralph Vaughan Williams was slow to mature as a composer, gaining his first acclaim in 1910 with the Fantasia on a Theme of Thomas Tallis. Much of his earlier musical activity focused on the study, collection and revival of English folk songs, primarily from the countryside. Others involved in this effort included Gustav Holst, Cecil Sharp, and Percy Grainger. The English Folk Song Suite was originally scored for military band; in 1924, Gordon Jacob made the full orchestra version heard today.  The opening march contains three songs, the third of which “Dives and Lazarus”, was used by Vaughan Williams as the theme for Five Variants on Dives and Lazarus, a piece played at his funeral. The second movement intermezzo is based on two songs and the concluding march on four songs from Somerset.

ONE ENGLISH FOLK SONG ARRANGED BY AN AUSTRALIAN. Percy Grainger left his native Australia at the age of 15 to seek advancement in Britain, where he remained until 1914 when he left for the U.S. During his period in England he was a member of the English folk song revival movement, and his arrangements have preserved a number of tunes so well known that the actual names have been supplanted by words such as “I’m a little teapot”. Shepherd’s Hey, which has been set for a number of instrumental groupings, is based upon a Devonshire fiddle tune collected by Cecil Sharp.

THE FINAL SYMPHONY BY THE FATHER OF THE SYMPHONY. Franz Joseph Haydn was born on the border of Austria and Hungary but spent much of his career in the service of the Esterhazy family, whose palace at Eisenstadt, Austria is only a few miles from the current border with Hungary. The death of Prince Nicholas Esterhazy in 1790 left the members of the court orchestra unemployed, and although leaving Haydn on the payroll (he was Europe’s most famous composer), Haydn had little to do. Therefore he accepted an invitation from the impresario Johann Peter Salomon to come to London to compose and produce concerts. Haydn spent much of the period between 1791 and 1795 in two London residencies which resulted in the final 12 of his 104 numbered symphonies. Haydn is generally acknowledged as the “Father of the Symphony” and his final symphony (No 104), called the “London” Symphony, is arguably his finest according to the eminent music writer Donald Francis Tovey.

The “London” Symphony is notable for its complexity and richness (it is one of only five Haydn symphonies to use clarinets), but also for its use of “popular” elements, particularly the fourth movement’s main theme, said to be based on a Croatian or Czech folk tune. In the words of Haydn scholar H.C. Robbins Landon: “In the London of 1792, the composer, players, audience, and critics were closer than they ever to be again…it was the last time, almost, that there was no mental gap between the intelligent listener and the composer.”

“POMP AND CIRCUMSTANCE” MARCH NO 6. Sir William Walton  achieved notoriety at an early age with his 1923 incidental music for poems by Edith Sitwell titled Façade. Subsequent major successes with the oratorio Belshazzar’s Feast and his Symphony No. 1, plus the death of Edward Elgar in 1934, made him the choice to provide the 1937 coronation march for King George VI. Crown Imperial was an instant success, also being used for the coronation of Queen Elizabeth II as well as the recessional for the marriage of Prince William and Kate Middleton. Another indication of its quality is its nickname of Pomp and Circumstance March No. 6, a reference to the five marches by Elgar with that title.

“RONDEAU” FROM THE SUITE FOR ABDELAZER

THE GREATEST ENGLISH COMPOSER BEFORE BRITTEN?.  Henry Purcell was born into a family of musicians closely associated with Westminster Abbey, the center of the Church of England. Purcell lived within a few hundred yards of Westminster his entire life, and he was the Abbey organist from 1679 until his tragically early death. The catalog of his works compiled by F.B. Zimmerman lists about 700 compositions in many genres; in the words of musicologist Richard Taruskin “Purcell was as close to an all-round musical genius, within the practices of his day and the institutions he served, as England has ever produced.”

His major theatrical works include the opera Dido and Aeneas and the extended incidental music for plays such as The Fairy Queen and The Indian Queen. In 1695 he composed ten brief numbers for a play titled Abdelazer, or The Moor’s Revenge, the second of which is the “Rondeau” used by Benjamin Britten as the main theme for The Young Person’s Guide to the Orchestra.

THE YOUNG PERSON’S GUIDE TO THE ORCHESTRA  OP 34

THE GREATEST ENGLISH COMPOSER SINCE PURCELL?  Benjamin Britten achieved world-wide fame in June 1945 with his opera Peter Grimes, still the best known of his 17 works for the lyric stage, and a work which left him financially secure. However, in the mid 1930s he had to support himself by writing the soundtracks for government sponsored film documentaries, so he was well positioned in late 1945 to fill a commission for an educational documentary film called Instruments of the Orchestra. The film premiered in 1946, as did the concert piece titled Young Person’s Guide to the Orchestra with the subtitle Variations and Fugue on a Theme of Purcell. The Purcell theme from Abdelazer is transformed by Britten into a stately march decked out with dazzling percussion. The 13 ensuing variations are detailed on the program page. The final fugue is capped by a majestic return of the Purcell theme, played in counterpoint against the fugal materials.