Two of the ESO’s favorite soloists will do double duty in both the Brahms “Double” Concerto and in a special arrangement of a popular Dvořák Slavonic Dance. The Hungarian and Slavonic dances illustrate the lighter sides of Brahms and Dvořák, while the “Double” Concerto and the Dvořák Seventh Symphony represent both composers at their most profound. 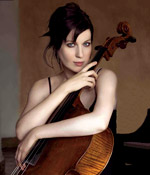 Wendy Warner is one of the world's leading cellists. The New York Times reported "Warner's expressive playing a pleasure," while Strings hailed her "almost frightening technique."

2010-2011 season highlights include the release with pianist Irina Nuzova, Russian Music for Cello & Piano, and The Beethoven Project - piano trios with pianist George Lepauw and violinist Sang Mee Lee - both from Cedille Records.

Warner performs on a Joseph Gagliano cello and a Carl Becker cello with a Francoix Xavier Tourte bow c. 1815 known as the "De Lamare," on loan from the Stradivari Society of Chicago.

A recipient of the Avery Fisher Career Grant, Warner is on the faculty at the Schwob School of Music at Columbus State University in Georgia. 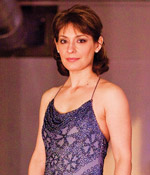 Romanian violinist Irina Muresanu has won the hearts of audiences and critics alike with her exciting, elegant and heartfelt performances of the classic, romantic and modern repertoire. The Boston Globe has come to praise her as “not just a virtuoso, but an artist” and the Los Angeles Times has written that her “musical luster, melting lyricism and colorful conception made Irina Muresanu’s performance especially admirable” while Strad Magazine called her Carnegie/Weill Hall performance“a first-rate recital”. Irina Muresanu’s performances have been frequently cited as among the Best of Classical Music Performances by the Boston Globe, and her recital in the Emerging Artist Celebrity Series was named one of the Top 10 musical events by the TAB Magazine.

In 2013, Muresanu introduced her “Four Strings Around the World” project, a solo violin recital featuring works of composers inspired by various musical cultures around the world. An early reviewer of the project wrote that“[W]hen the D Major section moves into D minor [in Bach’s Chaccone], it seemed as if the violin had had its heart broken and was crying. Muresanu’s performance was simply spectacular.”

Her recent recording releases include the Thomas Oboe Lee Violin Concerto (dedicated to Muresanu) on the BMOP label, works of Elena Ruehr (also dedicated to Irina Muresanu) on Avie Records label and the complete William Bolcom’s Violin and Piano Sonatas on Centaur label with pianist Michael Lewin (a recording that was funded by a Copland Recording Grant). In Europe, her recording of the Guillaume Lekeu and Alberic Magnard late Romantic Violin and Piano Sonatas with pianist Dana Ciocarlie for the AR RE-SE French label has sparked enthusiasm. Fanfare noted the recording with“singing and soaring…[a] sizzling performance.” Ms. Muresanu has also recorded chamber music works of Gerhard Schedl with the Walden Chamber Players, the world premiere recording of Marion Bauer’s Sonata for Violin and Piano with pianist Virginia Eskin on Albany Records, and a CD featuring chamber works of Erich Korngold released by the VPRO Radio Amsterdam. Adding to her other competition laurels, Ms. Muresanu was granted a Special Commendation award for her recording of Schoenberg’s Fantasy for Violin and Piano at the 3rd International Vienna Modern Masters Performers Recording Competition.

Irina Muresanu currently serves on the faculty the of Boston Conservatory, and has taught at Harvard and MIT. Irina will begin teaching at the University of Maryland in September 2015. Her ensemble, the Boston Trio, is Ensemble-in-Residence at the New England Conservatory, the institution at which she received the prestigious Artist Diploma degree and a Doctor in Musical Arts degree. A native of Bucharest, Romania, Ms. Muresanu resides in Boston, MA with her husband, son and dog. She plays an 1856 Giuseppe Rocca violin and a Charles Peccatte bow courtesy of Mr. Mark Ptashne.

arranged for Violin, Cello and Orchestra

HUNGARIAN DANCE NO. 6 IN D MAJOR

Brahms’ virtually lifelong fascination with the Hungarian/Gypsy style of music began in earnest in 1853 when he toured Germany as piano accompanist to the violinist Eduard Reményi, whose specialty was crowd pleasing encores in this genre. Brahms began compiling arrangements of these melodies, and in 1869 offered four-hand piano versions of 10 “Hungarian Dances” to the publisher Fritz Simrock. The dances were extremely successful financially for Simrock, who had paid Brahms a one-time fee, and in 1880 Brahms supplied a second set of 11 dances. Brahms did not assign either set an opus number, an indication that he considered himself more an arranger than a composer of the basic tunes. Brahms personally orchestrated only the dances numbered 1, 3, and 10; the Dance No. 6 heard on this concert was orchestrated by Martin Schmeling. The Sixth Dance ranks with the Fifth as the most popular of the 21.

In 1877 Brahms met Antonin Dvořák, at that time an impoverished Bohemian composer, and the two became great friends. After lobbying by Brahms, Simrock commissioned eight “Slavonic Dances” for piano four-hands from Dvořák, which Dvořák composed and orchestrated in 1878. A second set of eight followed in 1886, also for four-hand piano and then orchestrated by Dvořák. The 16 dances utilize a number of different national forms; the A Flat Dance from Opus 46 is a polka and the E Minor Dance from Opus 72 is a starodávný (similar to a polonaise). The arrangement of the E Minor dance for violin, cello and orchestra is by Oskar Morawetz.

CONCERTO FOR VIOLIN, CELLO AND ORCHESTRA IN A MINOR, OP. 102

The genesis of the “Double Concerto” might be said to begin during the 1853 tour of Brahms and Reményi, when the Hungarian violinist introduced Brahms to another Hungarian violinist, Joseph Joachim. Joachim gave many Brahms premieres, most notably that of the Violin Concerto in 1877, and became one of Brahms’ closest friends. However, in 1880 Joachim became convinced that his wife was having an affair with Fritz Simrock, but Brahms took the side of the innocent wife. This led to a serious rupture between Brahms and Joachim, which lasted until 1887 when Brahms finally persuaded Joachim to resume their relationship by composing the Double Concerto for him and the cellist Robert Hausmann. The work ranks with Beethoven’s “Triple Concerto” and the Mozart’s Sinfonia Concertante for Violin and Viola as the greatest concertos since Bach for multiple instruments, and was Brahms’ final work for the orchestra.

Allegro. A very brief introduction for the orchestra is followed by an extended solo for the cello and then violin; in effect the cadenza is at the beginning rather than the end of the movement.

Andante. The D Major slow movement is built on a beautiful melody similar to a folk tune, and provides a double cadenza for the two soloists.

Vivace non troppo. The “Hungarian” style finale is in A Minor until an arresting modulation to A Major by both solo instruments just before the close.

Dvořák composed nine symphonies, but their numbering was confused from their time of composition (1865-1893) until roughly 1960. The old numbers included only five symphonies, with this Seventh Symphony called No. 2 and the Ninth “New World” Symphony listed as No. 5. Thus when Donald Francis Tovey published the following in 1935, he was referring to the Symphony No. 7:

“I have no hesitation in setting Dvořák’s Second Symphony along with the C Major Symphony of Schubert and the four symphonies of Brahms, as among the greatest and purest examples in this art-form since Beethoven.”

The Grove Dictionary of Music article on Dvořák states: “For all the enormous, and justified, popularity of the Ninth Symphony… there can be little doubt that the highest achievements of his creative career are the Seventh Symphony and the Cello Concerto.”   The Seventh Symphony was composed in late 1884/early 1885 on a commission from the Royal Philharmonic Society; Dvořák conducted the premiere in London in April 1885.

Allegro maestoso. The brooding opening theme, which came to Dvořák while he was waiting to greet a train of Hungarian nationalists at the Prague railroad station, establishes the dramatic nature of this D Minor movement. The lyrical second theme in B Flat Major reminds some commentators of the famous opening cello solo of the slow movement of Brahms’ Second Piano Concerto, also in B Flat. After a short development, the recapitulation builds to an impassioned climax before dying away in defeat.

Poco adagio. This F Major slow movement is notable for its main theme on the clarinet, for a later prominent horn solo and for an impassioned despairing outburst, possibly expressing Dvořák’s grief over the death of his mother.

Scherzo:  Vivace. The key of D Minor returns in this driving scherzo, in the Czech dance form known as the furiant, which was also used for the third movement of Dvořák’s Sixth Symphony.

Finale. Allegro. Dvořák wrote to Brahms that this symphony “…must be such as to shake the whole world,” and the powerful finale delivers on this hope. March-like rhythms pervade this D Minor movement, mostly notably the A Major second theme, embroidered by the horns. This second theme is recapitulated in D Major, rather than the expected D Minor, presaging the final triumphant D Major chords.