Evanston’s Howard Levy is the supreme virtuoso of the harmonica, and he makes his ESO debut playing his own Concerto for Diatonic Harmonica and Orchestra, as well as improvising special interludes within Gershwin’s classic Porgy and Bess orchestral suite. Award winning composer Christopher Theofanidis was commissioned by a consortium of orchestras, including the ESO, to create a new 17 minute work for orchestra, and his Dreamtime Ancestors will receive its Illinois premiere to open the program. 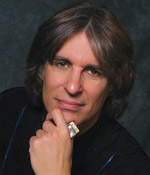 Multiple Grammy- Award winner Howard Levy is an acknowledged master of the diatonic harmonica, a superb pianist, innovative composer, recording artist, bandleader, teacher, producer, and Chicago area resident. His musical travels have taken him all over the geographical world and the musical map. Equally at home in Jazz, Classical music, Rock, Folk, Latin, and World Music, he brings a fresh lyrical approach to whatever he plays. This has made him a favorite with audiences worldwide, and a recording artist sought after by the likes of Kenny Loggins, Dolly Parton, Paquito D’Rivera, Styx, Donald Fagen, and Paul Simon. As a sideman, Howard has appeared on hundreds of CDs and played on many movie soundtracks.

He is perhaps best known for the four CD’s he recorded with Bela Fleck and The Flecktones, a unique band that set the musical world on its ear back in the early 1990’s. He got back together with the band in 2010 and recorded the CD Rocket Science. They toured extensively in 2011–2012, and Howard won a Grammy for Best Instrumental Composition for “Life in Eleven”, which he wrote with Bela Fleck.

Howard is music director and chief composer for the Latin/Jazz group Chévere de Chicago. He produced and released the band’s CD Secret Dream, and Time Capsules with his acoustic swing group Acoustic Express, on his own label, Balkan Samba Records. His solo Jazz CD, Alone and Together on Balkan Samba, and his Jazz trio CD Tonight and Tomorrow on the Chicago Sessions label, both received 4-star reviews in DownBeat.

In 2011 Howard also released a classical CD featuring his “Concerto for Diatonic Harmonica and Orchestra,” the first concerto ever composed for the diatonic harmonica. He has performed the piece more than 20 times in the US and Europe.

Howard Levy performs live with the Ulm University Symphony. He is playing the Harmonica Concerto (second movement) from the start of the clip until 2:56.

The "Happy Ending" finale to The Red Pony Suite.

Dreamtime Ancestors is a 3-movement, 17 minute tone poem for orchestra that includes optional readings before each movement. (These texts are printed two pages farther in this program book). It is based on the Australian aboriginal creation myths connected to ‘dreamtime,’ where each of us is connected to each other through our ‘dreamtime ancestors’ in the past, present, and future. This is referred to as ‘all-at-once time.’ This is the third time that the Evanston Symphony Orchestra has participated in a consortium of orchestras commissioning a new work for orchestra, and this is its Illinois premiere. The work is dedicated to the late Stephen Paulus, who was the original composer selected by the consortium. After his untimely death, the commission was transferred to Christopher Theofanidis, one of the more widely performed American composers of his generation. He regularly writes for a variety of musical genres, from orchestral and chamber music to opera and ballet. His work, Rainbow Body, which is loosely based on a melodic fragment of Hildegard of Bingen, is one of the most performed orchestral works of the past fifteen years, and has been programmed by over 120 orchestras internationally including the Evanston Symphony. Mr. Theofanidis is currently on the faculty of Yale University and has taught at the Peabody Conservatory and the Juilliard School. He is also a fellow of the US-Japan’s Leadership Program.

CONCERTO FOR DIATONIC HARMONICA AND ORCHESTRA

This concert marks the first time the ESO has performed a work by Howard Levy, one of Evanston’s most eminent musicians and an acknowledged master of the diatonic harmonica. The diatonic harmonica is much more difficult to play than a chromatic harmonica, which has a button on the side which permits easy playing of the equivalent of the black notes on a piano keyboard.

Born in Brooklyn, N.Y., Howard Levy studied piano and theory at The Manhattan School of Music in N.Y. for four years and pipe organ with Carl Lambert for two years. He attended Northwestern University in Evanston, IL for two years, playing in the Jazz band.

The Concerto for Diatonic Harmonica and Orchestra, premiered in 2001, is in three movements with a total duration of about 17 minutes. The “Air, Jig & Reel” presents the main theme of the entire work and includes a virtuosic cadenza near its end, fully in the tradition of a classic concerto for piano or violin. The second movement is a “Theme & Variations,” another standard classical form, and leads via a short cadenza directly into the third movement: “Etude, Tango/Caprice & Finale.” The finale culminates in the return of the main theme from the first movement, yet another compositional device of the standard classical repertoire.

SUITE FROM THE RED PONY

Although born in Brooklyn, Aaron Copland has become known as a leading composer of music typifying the great American West. His “Americana” phase began in 1936 with El Salón México and continued with his “cowboy” ballets Billy the Kid and Rodeo. His final work in this compositional period was his score for the 1948 film The Red Pony, based upon a novella by John Steinbeck and directed by Lewis Milestone. This was not his first work for cinema; his film scores included Of Mice and Men, Our Town, and The North Star, all nominated for the Academy Award, and The Heiress, which won the Award in 1949.

The Red Pony is Copland’s best known film score; he recast the hour of music from the film into this six movement, 25 minute suite. The Red Pony is set in California and contains some of Copland’s most characterful “western” themes, such as the opening and closing music and the “Walk to the Bunkhouse.”

SELECTIONS FROM PORGY AND BESS

George Gershwin’s reputation and stature as a serious composer has grown substantially over the past 30 years, due in large part to the many performances of Porgy and Bess by leading opera companies. In fact, Porgy and Bess is cited by many critics and writers as “the great American opera.”

The Brooklyn born Gershwin quickly made his reputation as a leading composer of popular tunes on what was called “Tin Pan Alley.” However, he wanted to compose in traditional classical forms and he achieved a huge success with Rhapsody in Blue in 1924, followed by other “classical” works such as the Piano Concerto in F, the tone poem An American in Paris, and the Cuban Overture. He pursued possible studies with such eminent modern composers as Stravinsky, Ravel, and Alban Berg. There is a standard story, possibly apocryphal, that when Gershwin asked Ravel or Stravinsky if he could study with him, the eminent composer asked how much money Gershwin had received the previous year. Gershwin replied “About $200,000,” to which the famous composer said “Perhaps I should take lessons from you.”

The opera Porgy and Bess was Gershwin’s largest work, running over to over three hours of music when played uncut. Today’s performance features one of several orchestral arrangements of the music from Porgy and Bess constructed by Robert Russell Bennett. These songs, among the best known melodies ever composed, include “Clara,” “A Woman is a Sometime Thing,” “Summertime,” “I Got Plenty O’ Nuttin’,” “Bess, You Is My Woman Now,” “Oh I Can’t Sit Down,” ”There’s a Boat Dat’s Leavin’ Soon for New York,” “It Ain’t Necessarily So,” and the finale “Oh Lord, I’m On My Way.” Howard Levy will add his diatonic harmonica to selected songs.