Our all-Beethoven concert is devoted to works composed between 1803 and 1810, his middle or “Heroic” period. Inna Faliks, frequently heard on radio station WFMT, will take on the demanding solo role in the Third Piano Concerto. The conclusion of the Egmont Overture is titled “Victory Symphony,” which is an equally appropriate description for the complete Fifth Symphony, the most famous symphony ever composed. 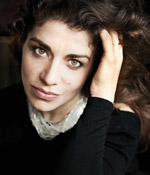 “Adventurous and passionate” ( The New Yorker) Ukrainian-born pianist Inna Faliks  has established herself as one of the most exciting, committed, communicative and poetic artists of her generation. Faliks recently relocated from NYC to Los Angeles, after being named the new Head of Piano and Associate Professor of Piano at UCLA Herb Alpert School of Music.  After her acclaimed debut with the Chicago Symphony Orchestra, she has performed on many of the world’s great stages, with numerous orchestras, in solo appearances, and with conductors such as Leonard Slatkin and Keith Lockhart. Critics praise her “signature blend of lithe grace and raw power“ (Lucid Culture), “courage to take risks, expressive intensity and technical perfection” (General Anzeiger, Bonn), “poetry and panoramic vision” (Washington Post), and “riveting passion, playfulness” (Baltimore Sun). Her lauded discography includes a recent all- Beethoven release, “Sound of Verse –  music of Boris Pasternak, Ravel, and Rachmaninoff” – both on MSR Classics,  and a Disklavier recital recording for Yamaha. Upcoming recordings include  ”Polonaise-Fantasie, story of a pianist” theater-piano piece,  and her Music/Words new commissions CD.

Faliks’s distinguished career has taken her to numerous recitals and concerti in prestigious venues in the US as well as highly reviewed appearances in France, Italy, Switzerland, Ukraine, Estonia, Japan,  Russia, and Israel. Winner of many competitions, including the ProMusicis International Award, she has been featured on radio and international television broadcasts, and has performed in Carnegie Hall’s Weill Concert Hall, Metropolitan Museum of Art, Paris’ Salle Cortot, Chicago’s Orchestra Hall, Moscow’s Tchaikovsky Hall, LA’s Zipper Hall,  and in  festivals such as Portland Piano International, Newport Festival, Music in the Mountains, Bargemuisc Festival, Peninsula Festival, Verbier Festival, and more.

Committed to innovative programming, Faliks has premiered 13 Ways of Looking at the Goldberg, has performed and recorded the unknown piano works of Russian poet Boris Pasternak, appeared in theatrical productions such as “Admission: One Shilling” with Downton Abbey star Lesley Nicol,  has premiered new works by many contemporary composers, including  Lev ‘Ljova’ Zhurbin, Clarice Assad, Jan Freidlin, Sean Hickey, Tania Leon, and more. Faliks  is the founder and curator of Music/Words , a series that pairs together live performances with readings by established contemporary poets. The series has been heard and seen in NYC, Chicago and LA for 7 seasons now, live and on radio.  www.musicwordsnyc.com

Christian Thielemann and the Vienna Philharmonic.

Movements 2 and 3 with Inna Faliks.

Christian Thielemann and the Vienna Philharmonic.

The works of Ludwig van Beethoven (1770–1827) are usually described in terms of three historical periods: early (ending in 1802), middle (1803–1812), and late (1813–1827). These dates are approximate and are generally, but not universally, accepted. The middle period is also frequently referred as the “Heroic period;” because all three works on this program come from this decade, what follows is a general introduction.

Much of the academic discussion of Beethoven’s heroic style has been framed by a highly influential book — Beethoven Hero — by musicologist Scott Burnham. The book concentrates on three quintessentially heroic works: Symphony No. 3 “Eroica,” Symphony No. 5, and the incidental music to Goethe’s Egmont, particularly the Overture. Burnham’s first paragraph of the Introduction summarizes the importance of these works:

“For nearly two centuries, a single style of a single composer has epitomized musical vitality, becoming the paradigm of Western compositional logic and of all the positive virtues that music can embody for humanity. The values of Beethoven’s heroic style have become the values of music.”

The concert opens with one of Beethoven’s final “heroic” works, the Overture to his incidental music for a production of Goethe’s play Egmont. Beethoven composed about 45 minutes of short interludes and songs for a Vienna production of Egmont in 1809/1810, eight minutes of which are occupied by the overture. Count Egmont was a Dutch patriot of the sixteenth century who led a failed revolt against the Spanish occupiers of the Netherlands. His execution near the end of the play is followed by what Goethe specified as a “Victory Symphony,” which forecasts the eventual triumph of the Netherlanders over the Spanish. Beethoven uses this Victory Symphony music, in the key of F Major, as the coda which concludes the stormy overture, which is otherwise in the gloomy key of F Minor. In the words of Burnham in his chapter on Egmont,
“… there is no closure in music quite like that of the Beethovenian coda.”

The Third Piano Concerto is in C Minor, Beethoven’s favorite key for stress and struggle. It was premiered in 1803 near the beginning of the middle period, and may be thought of as a transitional work between his earlier classical style and the later heroic style of the “Emperor” Piano Concerto (No. 5). The Third Concerto, along with the “Emperor,” is the longest of Beethoven’s piano concertos.

Allegro con brio. The opening orchestral passage prior to the entrance of the soloist, lasting three and one half minutes, is the longest of any Beethoven concerto, and includes a rising theme at the one minute mark which can be heard in the final movement of the Fifth Symphony. The long delayed entry of the soloist is announced by rising scales followed by the principal themes of the movement. The solo cadenza, as usual near the end of the movement, was composed by Beethoven at a later date, probably around 1809.

Largo. The second movement has been called “the most highly developed slow movement in all Beethoven’s concertos” by renowned music writer Donald Francis Tovey. Its unconventional (for the time) key of E Major is the key farthest removed harmonically from the C Minor of the first movement, which creates an effect of heavenly serenity far removed from the C Minor struggles of the outer movements.

Rondo-Allegro. The energetic C Minor finale is in the standard rondo form of the time, with several alternating themes but with less development than in a sonata form movement. Following another cadenza, the very short coda moves to the key of C Major, the harmonic shift pursued to vastly greater effect in the Fifth Symphony.

E.M. Forster opens Chapter 5 of his novel Howards End as follows: “It will be generally admitted that Beethoven’s Fifth Symphony is the most sublime noise that has ever penetrated into the ear of man,” which summarizes the influence this most popular of all symphonies has exerted since its 1808 premiere. The Fifth was the first symphony to shift its weight from the first, or the first two of its four movements to the finale. The finale is not only the longest movement, but the emotional and harmonic goal of the entire piece, which taken as a whole could be titled a “Victory Symphony.”

Allegro con brio. The most famous four notes in music, referred to as “fate knocking at the door,” begin the exposition, which is repeated. The exposition, development, recapitulation, and coda sections each comprise about 124 measures in the score, which affords the coda far more prominence than typical for a classical symphony. The movement begins in C Minor, tries unsuccessfully to attain C Major, and ends in C Minor.

Andante con moto. The slow movement is in the “expected” key of A Flat Major and is a series of variations on the opening theme. Trumpets and timpani enter with the key of C Major in two variations, but they die away inconclusively.

Scherzo: Allegro. C Minor returns as well as the knocking rhythm of the first movement in a passage Forster calls “the goblins.” A short trio section in C Major featuring the lower strings, is followed by “the goblins,” and dynamics shrink softer and softer to a single timpani note. With a huge crescendo and no break…

Allegro. The finale opens in triumphant C Major; the orchestra is augmented by three mighty trombones plus piccolo and contra-bassoon, all used for the first time in a symphony. This a sonata form movement with a repeated exposition, development, and a recapitulation which reacts the transition from the scherzo to the opening of the finale. The coda assures the absolute certainty of C Major triumph.