Originally hailing from New York, Jen McGeary’s family relocated to Minneapolis and then to Chicago when she was in fourth grade. Her new school was offering the opportunity to try out stringed instruments, and after deeming the violin too squeaky and the cello too complicated, Jen settled on viola. This seemingly arbitrary selection became a passion that lasted all through high school, including time with the Chicago Youth Symphony Orchestras and private lessons with former ESO Concertmaster Julian Arron and then college. After graduating from the University of Kansas and returning home, Jen found herself without an ensemble for the very first time. She contacted Julian for recommendations, and he suggested that she join him in the Evanston Symphony.

Penelope Sachs grew up in a musical family. Her mother was an accomplished singer, cellist, and pianist who insisted that all her children take piano lessons. By about 13 years old, Penelope had had enough of solitary playing and decided to transition to an orchestral instrument. In this case, it was Penelope’s mother who thought she would sound too squeaky on the violin, and teenaged Penelope certainly couldn’t play the cello like her mum, so viola was it! Penelope also played throughout her time at university and then joined a volunteer orchestra in London after she moved there for work. She met her future husband, Toby, when they both worked in advertising for Leo Burnett. In 1993, he was transferred to the Chicago office, so they packed up their 2-year-old daughter and resettled in Evanston. With no job, no friends in her adopted country, and a small child at home, Penelope was eager for a creative and social outlet. A chance introduction to a singer from the North Shore Choral Society led her to the ESO.

The Evanston Symphony of the early 90s was not the warm, welcoming group it is today. Both Jen and Penelope called to inquire about joining, and they were each told that they were not needed. Fortunately, they showed up anyway and on the very same night. That September evening, the two “newbies” were relegated to a stand at the back of the section, and it would be a good three weeks before the first stand players would acknowledge their presence.

Penelope quickly learned that, in addition to the spoken language differences between British and American English that she was already navigating, the musical languages were completely different. Director Lynn Schornick lost her with phrases like “quarter note,” “half note,” and “eighth note,” which she knew as “crotchet,” “minim,” and “quaver.” The orchestra was even configured differently, right down to which musician at the stand was to turn the pages (something she and Jen learned the hard way). As they began to chat, Jen became Penelope’s source for explaining these musical differences and eventually the cultural differences as well, particularly why Americans do things as we do.

Though Jen had just graduated college and Penelope was a stay-at-home wife and mother, the two hit it off right away. It turned out that their personalities and their playing styles meshed well together. They both took on volunteer roles for the ESO as well, with Penelope serving as a longtime board member and Jen managing the pre-concert emails and all the Noteworthy emails delivered to your inbox during COVID-19, a herculean task!

Their many years in the orchestra have earned Penelope and Jen the right to be permanent stand partners, where Penelope ended up being the page-turner in the end. Their Tuesday night chats enabled them to support one another musically and personally as they journeyed through weddings, Jen’s divorce, children, the loss of parents, Penelope’s dressage competitions with her horse, Frisbee, and Jen’s work in print production, currently with the American Academy of Pediatrics.

One of the biggest recent life changes was the pandemic, and even that couldn’t prevent them from texting, emailing, and enjoying socially distant get-togethers. They are both looking forward to Jen’s upcoming wedding, yet another milestone they will celebrate together, and, of course, the first ESO rehearsal on July 13. 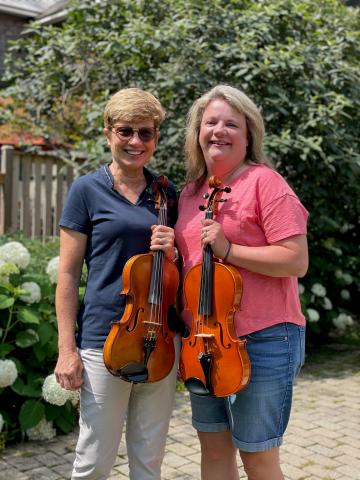