Fun Facts About Our Concert Venue

Fun Facts About Our Concert Venue

Gillson Park offers 60 acres of beautiful lakefront property, ideal for picnics, bicycling, tennis, and many other spring and summer outdoor activities. In the heart of Gillson Park is the Wallace Bowl, a 2,500 seat amphitheater.

The marker at the entry of the bowl holds a slight mystery; how does it merit two birth dates—both 1936 and 1947? The stories surrounding Wallace Bowl—including the bewildering dual birth dates—stretch back to America's Great Depression. The project was born in part thanks to the Works Progress Administration program, the federal Depression-era effort to hire unemployed Americans and build public works projects.

The construction of the bowl, which began in 1936—hence the first birth date—was completed in 1939. Designed by future park district superintendent Gordon Wallace, the bowl then called the Wilmette Amphitheater, cost $68,263.

By 1945, the bowl needed a permanent stage for its acts, from the Illinois Symphony to military bands, opera singers, and other attractions. A new stage opened in 1946 but wasn't dedicated until Memorial Day of 1947, clearing up the final marker mystery. In 1969, it acquired its current name to honor Wallace, who had retired the previous year. 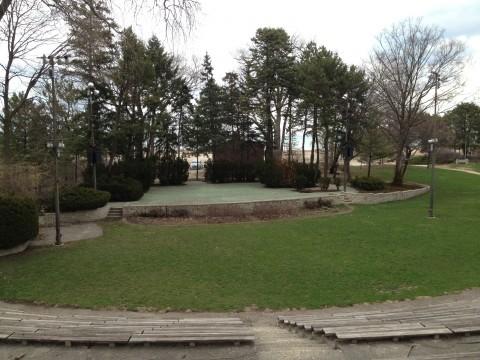