It all began in February 1989 at an Evanston Symphony Orchestra rehearsal in the band room at ETHS. Fran Zirbel, then new to the Chicago area, had just joined the second violin section of the orchestra the month before. At that particular rehearsal, she and a handsome red-haired cellist made eye contact (as Jay says “from the back of the section you can look across and see almost everything”). At the break, Fran introduced herself to Jay Foley. One could make a very short story of this and simply say “the rest is history," but to quote then-librarian, Leonard Foster “the ESO is a hotbed of romance” and since we all love a good courtship narrative, why end the story there?

Both Jay and Fran name their most memorable ESO concert as the one held on March 17, 1989, featuring the Sibelius 2nd Symphony and Dvorak Violin Concerto. It was after that performance that they went on their first date to a Mexican restaurant, Los Magueyes on Chicago Avenue (remember the pink and purple stucco exterior?). Both agree it was a successful evening. “We clicked at first and we’re still clicking 32 years later!”

Fran recalls their courtship as many fun evenings eating out – often at Bennigan’s on Chicago’s Michigan Avenue (near where she was living at the time), enjoying jazz at The Green Mill, and enjoying post-concert pizza gatherings at Gulliver’s with 10-12 various younger members of the orchestra. They traveled to Germany, went camping in Door County, and spent time getting to know one another. So how and where did Jay “Pop the Question?” At Eduardo’s in downtown Chicago one evening for dinner, he said, “We should get married,” and Fran recalls she was not surprised and, of course, agreed!

Their wedding in November 1990 was a small one; most of the music was a selection of hymns. They settled in Evanston to rear their family and continue playing with the ESO (of course!). As their three sons were growing up Fran says they sometimes rotated which of them would play with the orchestra and which would be tutor-chauffeur-homework guru, coach, etc. But one or the other, or both, have played continuously for these 32 years!

Today, Fran and Jay share pride in their sons: a 24-year-old mechanical engineer in Newport News, Va., (and a cellist through high school); a 23-year-old working for Roche Pharmaceuticals in Indianapolis (played trumpet through college); and an 18-year-old at Notre Dame, majoring in engineering and music performance (trombone).

They enjoy music, camping, traveling, and baseball. They also share a love of Weird Al Yankovic, characterizing themselves as “groupies” for having attended 8-9 of his concerts. (Maybe that’s one key secret to a long and happy marriage!) 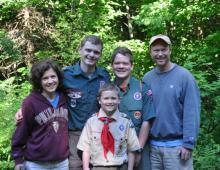