Beethoven’s “Eroica” was recognized as a masterpiece at its 1804 premiere and retains its status as one of the most revolutionary works in Western music. Barber’s overture is his earliest orchestral piece and demonstrates his gift for melody and orchestration. Evanston-born Sang Mee Lee, chair of the strings department for the Music Institute of Chicago, takes the solo part of Max Bruch’s “greatest hit,” his deeply romantic First Violin Concerto. 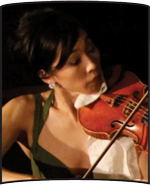 At the age of five, Chicago native Sang Mee Lee debuted as soloist with the Chicago Businessman's Orchestra and has appeared with the Chicago Symphony Orchestra under Erich Leinsdorf, the Lausanne Chamber Orchestra under Emmanuel Krivine, and the Korean Broadcasting Orchestra under Eun-Sung Park. Her solo performances and recitals have been heard in the United States and in Europe and the Far East.  Here in Chicago, she is the youngest artist to appear on the Dame Myra Hess Series and has performed on Ravinia Rising Stars.

A graduate of The Juilliard School, Sang Mee earned Bachelor's and Master's degrees in violin performance.  Her past teachers and mentors have included Dorothy DeLay, Roland and Almita Vamos, Robert Lipsett, Josef Gingold, and Betty Haag.  Currently residing in the Chicago area, Sang Mee has been on faculty at the Music Institute of Chicago since 2000.

Nicola Benedetti plays the Violin Concerto No 1 by Max Bruch at the Proms in 2012.

Beethoven’s Eroica Symphony with the West-Eastern Divan Orchestra conducted by Daniel Barenboim at the 2012 proms. There is a 6 minute BBC introduction before the music starts.

OVERTURE TO THE SCHOOL FOR SCANDAL    9 Minutes

Samuel Barber ranks among the greatest and most popular of American composers. Born into a relatively well to do musical family in suburban Philadelphia, he attended the Curtis School Music and achieved success at an early age. The Overture to The School for Scandal was composed in 1931 as a graduation thesis from the Curtis School and was first performed in 1933.

The Overture is meant to depict the themes and characters of the eponymous 1777 play by Richard Brinsley Sheridan rather than actually serving as a prelude to a theatrical performance. It is composed in standard sonata form, with a bustling first theme in the strings and a contrasting lyrical second theme, played first by the oboe and then by the massed strings. After a short development section the two main themes return, with the lyrical theme now played by the oboe’s close relative, the English horn. Barber’s melodic gift often manifests itself in lyrical oboe themes repeated on the strings; this Overture is the first of such pieces which include the Symphony in One Movement, Knoxville Summer of 1915, and the Violin Concerto.


Although Max Bruch lived past the end of World War I, his three pieces which still survive — the Kol Nidre for cello, the Scottish Fantasy for violin and orchestra, and the concerto on today’s concert — were all composed between 1868 and 1881. The concerto is the earliest of the three, with the noted virtuoso Joseph Joachim premiering the definitive version in January 1868. It has enjoyed constant popularity ever since; in 1906 Joachim stated that the Germans had four violin concertos; those of Beethoven, Brahms, Mendelssohn and this one by Bruch.

I. Vorspiel-Allegro moderato — Vorspiel means “prelude” in German, and Bruch’s first movement is essentially a prelude to the second movement Adagio, which follows it without a pause. The first movement begins as if in standard sonata form with two memorable contrasting themes. But after a full scale orchestral outburst, there is no development section, but rather a transition directly into the second movement Adagio.

II. Adagio. This second movement is the heart of the concerto, richly melodic and rapturous. It builds to an impassioned climax just before its end.

III. Allegro energico. The G Major finale has the character of a Gypsy/Hungarian dance, but remains in the romantic melodic mold of the first two movements.

Beethoven composed many masterpieces in a variety of musical forms, including the piano and the violin sonata, the string quartet and piano trio, and the concerto. But the form with which his name is most closely associated is that of the symphony. Although his Fifth and Ninth Symphonies added many instruments to the symphonic orchestra, as well as voices and sung texts, Beethoven’s most important and revolutionary advances in the symphonic form came in this Third Symphony of 1804, titled the “Eroica.” Beethoven himself gave it this title after his original dedicatee, Napoleon Bonaparte crowned himself “Emperor.” The notes on the individual movements which follow will cover some of these revolutionary aspects of the “Eroica,” but the single most important of these is its sheer emotional scope and size. Its 50 minutes of playing time is about twice that of previous symphonies; however, the standard classical orchestra is expanded by only one player, a third horn.

I. Allegro con brio. Two emphatic chords start the exposition, followed immediately by the main theme on the cellos and string basses. This theme rises and then descends to a note which sounds “wrong” as compared to the symmetrical phrases of Classical Period works, a note which musicologist Richard Taruskin calls “possibly the most famous single note in the entire symphonic literature.” A long transition filled with slashing sforzandos leads to the second theme, after which this exposition is repeated. The following development section is much longer than that of any previous symphony and builds to a series of clashing dissonant chords. As a relief, Beethoven then introduces a lyrical “new” theme into the development, another innovation. The recapitulation is falsely announced by a solo horn, followed by the actual recapitulation on the full orchestra. The final part of the movement, the coda, is an extended buildup of the first theme, interrupted by a reprise of the “new” theme, and ends with two emphatic chords like those which started the movement.

II. Marcia funebre: Adagio assai. The slow movement in C Minor is the archetypal funeral march in the symphonic repertoire, serving as the model for many future marches such as those of Wagner and Mahler. The initial statement of the march is succeeded by a contrasting C Major section on oboe followed by trumpets and drums. Normally, a single return of the march would end the movement, by there are three more repetitions of the march before it finally disintegrates into darkness.

III. Scherzo: Allegro vivace. The scherzo is fast and much lighter than the previous movements. The central “trio” section is devoted to the three horns in E Flat (their favorite key) and some of the most difficult writing for this instrument in any symphony.

IV. Finale. Allegro molto. The finale is primarily variations of a theme (and its associated four note bass line) which Beethoven had previously used for his ballet The Creatures of Prometheus and for a solo piano piece usually referred to as the “Eroica Variations.” The series of variations culminate in a slow restatement of the “Prometheus” theme which reaches upward until capped off by the horn section. The fast coda is ended by two emphatic chords similar to the chords which began the symphony.