Our spectacular season finale celebrates another anniversary, the 200th birthday of Giuseppe Verdi. We will be joined by the North Shore Choral Society and four superb vocal soloists for what some have called “Verdi’s greatest opera.” This blazing score includes eight trumpets and a powerful part for the bass drum, all of which support some of Verdi’s most unforgettable melodies.

Please note, this concert has no intermission; latecomer seating is about halfway through program. 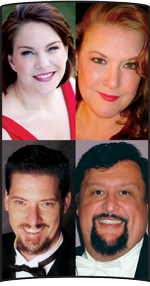 The North Shore Choral Society, a 140 member community chorus, has been a prominent musical force serving the northern suburbs of Chicago, Illinois, and beyond for over 75 years, giving many hundreds of nonprofessional singers the opportunity to perform choral masterworks, both old and new. The Society's repertoire ranges from the traditional to the avant-garde. Few choruses, whether professional or amateur, have as distinguished a track record of presenting such a variety of music. The chorus has performed at Ravinia with the Ravinia Festival Orchestra. The Society features outstanding soloists, and some of the area's finest musicians play in the orchestras engaged for the performances.

The complete Verdi Requiem from the 2011 Proms with Semyon Bychkov and the BBC Orchestra and Chorus. ( You can adjust the cursor at the bottom of the Youtube clip to access different parts of the Requiem. The Dies Irae followed by the Tuba Mirum starts at 9:39.)

This clip starts with the Dies Irae; Leonard Bernstein leads the London Symphony in St Paul’s Cathedral in London.

When we think of great Italian literature, we are likely drawn to the classics: Virgil, Dante, Petrarch, and Boccaccio. But in the nineteenth century, Alessandro Manzoni shone brighter in the firmament than those ancient stars. Manzoni was the pre-eminent figure of Italian romanticism, despite his limited output. His one novel, I promessi sposi (The Betrothed), represents the culmination of his creative work, after which he devoted the next forty years to linguistic studies of Italian dialects. When Manzoni died in 1873, the nation went into mourning.

Verdi was perhaps foremost among those struck by the loss of Manzoni. The composer read Manzoni’s novel for the first time in 1829, at age sixteen, and returned to it throughout his life. The two met in 1867 and developed a friendship of mutual admiration. Referring to this Requiem, Verdi wrote, “It is an impulse, or better said, a heartfelt need that drives me to honor, as best I can, this Great Man whom I have valued so much as a writer and venerated as a man, a model of virtue and of patriotism.” Significantly, while Manzoni was known in Milan as “Our Saint,” a reflection of his devout Catholicism, the atheist Verdi consistently avoided such religious language when he referred to the “Great Man.” Indeed, this Requiem Mass—more properly called Verdi’s Manzoni Requiem—represents an interesting tension of belief and agnosticism. Though it was premiered in a church to commemorate the first anniversary of Manzoni’s death, every subsequent performance that Verdi conducted was in an opera theatre. Unlike earlier Requiems by Mozart, Cherubini, and Berlioz, there is no role for an officiant, and thus it is intended as a purely musical work, not a sacred one. In addition, while the earlier Requiems tended to find peace and joy in the promise of Heaven, Verdi seems to delight in the dramatic thrills of Hell. Indeed, in an oft-quoted jibe, the nineteenth-century conductor Hans von Bülow described it as an “opera in ecclesiastical garb.”

The opening “Requiem and Kyrie” immediately communicates Verdi’s dramatic vision of the work. The cellos begin with a muted A-minor chord, answered by the choir with a whispered prayer for rest. At the mention of light (“et lux…”), the key suddenly switches to A major and the choir’s ascending lines seem to look upward to Heaven. The orchestra drops out as the choir makes an impassioned promise to honor God (“Te decet…”), though this dissolves into pathos. With the soloists’ impassioned statements of “Kyrie eleison,” the music seems to finally find the peace and hope that is conventionally associated with the Requiem.

I. Requiem and Kyrie 9 Minutes

Give them eternal rest, Lord, and let perpetual light shine on them. A hymn becomes you God in Sion, and to you a vow will be made in Jerusalem. Hear my plea, to thee all flesh will come.

The tranquility of the final bars of the “Kyrie” is immediately shattered by the five fortissimo G-minor chords that open Verdi’s famous “Dies irae.” The text for this movement is a thirteenth-century Latin hymn consisting of nineteen stanzas. Verdi abandons the traditional chant melody, instead composing a disparate series of musical settings that more closely reflect the mood and nature of each stanza. Thus the “Dies irae” captures the image of the world dissolving into ashes; the “Tuba mirum” evokes the trumpet’s sound on Judgment Day; the “Ingemisco” places the tenor soloist on his knees, begging for forgiveness; and so on.

Verdi composes a dramatic “Dies irae” whose rhythmic drive and dissonances often sound more operatic than sacred. The text of this sequence consists of nineteen stanzas. While they are traditionally sung to the same melody, Verdi chooses instead to group them into nine sections set in disparate musical styles that reflect the mood of each. Unusually, he repeats the opening “Dies irae” stanza in the “Liber scriptus” and “Confutatis” sections, lending a sense of continuity and large-scale structure to a movement that is otherwise connected only by the text. Adding to the operatic nature of this section is Verdi’s treatment of the soloists. In prior Requiems, soloists were used rarely, and then only as a quartet. In this sequence, however, several stanzas are treated almost as if they were arias and ensembles.

Day of wrath, that day shall dissolve the world ash, as David and the Sibyl promise. How great the terror will be, when the Judge is about to come on whose word everything hangs. The trumpet, scattering its awful sound through the graves of earth drives all before the throne.

Death and nature will be astounded when everything created will rise up to answer to the judge.

The book of record will be brought out, in which everything is entered from which the world will be judged. Then when the judge takes his seat, whatever is hidden, will appear; nothing will go unpunished. Day of wrath…

What am I, miserable man, then to say? To what protector will I turn, when even the just man scarcely is safe?

King of dreadful majesty, who saves those needing it for nothing, save me, you fount of piety.

Remember, Jesus holy one, that I am the reason for your life, so that you won’t destroy me on that day. Seeking me you have sat down weary; suffering on the cross you have bought me free; let not so much labor be for nothing. You impartial judge of punishment, make a gift of remission before the day of accounting.

I groan as when I’m guilty; my sins make my face red; God, spare the supplicant. You who absolved Mary and listened to the thief, have also given me hope. My prayers are not worthy, but you good Lord kindly make them so, lest I be burned in the everlasting fire. Save me a place with the sheep, and take me away from the goats, putting me on your right-hand side.

When the wicked are overthrown and given to the crackling flames, call me with the blessed. I beg as a supplicant and relying on you, my heart almost burned out with remorse; take pity on my end.

That tearful day in which shall rise out of the dust the guilty man to be judged. Spare him then, God. Holy Jesus Lord give them peace. Amen.

With the “Offertorio,” the four soloists resume their traditional role in a Requiem. Throughout the movement, they function as an ensemble, with rich polyphony guiding the prayers for the dead up to Heaven. The light orchestration and gentle melodies seem a relief after the tumult and Hellish images of the “Dies irae.”

Lord Jesus Christ, King of Glory, free the souls of all the faithful dead from the punishments of Hell and the bottomless pit. Free them from the mouth of the lion so that Hell will not gulp them down nor will they fall into darkness. But let holy Michael, the standard bearer, lead them into the holy light; as you once promised to Abraham and his children. Animals and prayers to you, Lord, we offer in praise; take them for the benefit of those souls whom we are remembering today. Make them, Lord, go from death to life; as you once promised to Abraham and his children.

The “Sanctus” portrays the glory of God through a double fugue that hearkens back to the music of Johann Sebastian Bach. Here, however, the fugue has little time to develop—not only is this the shortest movement, but the fugue dissipates into a sustained, arching melody for the final “Hosanna” section.

With the “Agnus Dei,” we return to the tranquil mood of the opening “Requiem” movement. The soprano and mezzosoprano soloists sing a three-fold prayer for peace, each time answered by the choir. With each statement, the orchestral accompaniment grows richer and more active, injecting ever more passion into each repetition of the prayer.

The “Lux aeterna” offers one final prayer for peace. The mezzosoprano begins over a scintillating sound that seems to embody the Heavenly light. This material is contrasted with the much darker setting of “Requiem aeternam.” However, the return of “lux perpetua” builds to a stirring climax and denouement that subsumes the darker “Requiem” of the tenor and bass soloists into the mezzosoprano’s final statement of “lux perpetua.”

Although earlier Requiems tended to end with either the “Agnus Dei” (Cherubini and Berlioz) or the “Lux aeterna” (Mozart), Verdi opts for a much darker, more dramatic ending. This is not just a prayer for peace and eternal light, but also a plea for redemption. Like the “Dies irae,” this movement begins with Hellish images, including a reprise of the “Dies irae.” The middle section returns to the placid prayer for peace and eternal light heard in the previous movement. Then the final “Libera me” section is a fugue on a theme derived from the “Sanctus” movement—though here it is first heard in an inverted form, perhaps suggesting the Dante-esque image of Hell as an inversion of Heaven. Through the intervention of the soprano soloist, however, the fugue gradually winds down and the movement dies out after a pianissississimo (pppp) cadencein C major, the relative major of the Requiem’s opening A minor and a key often used to represent divine purity due to its lack of sharps and flats.

Colin Roust is an Assistant Professor of Music History at Roosevelt University and sings in the tenor section of the North Shore Choral Society.

Translations are taken from George Martin’s book “Aspects of Verdi.”